Tonight’s BAAM is a very special one.  As you may or may not be aware, tonight’s review marks the 50th combo I’ve done here at beer and a movie. Moreover, this post is almost exactly one year from when I wrote my first. On June 13th, 2011, I wrote a review of Abita Amber and Bad Lieutenant and now, one year later, here we are. It has been a hell of a year and I just wanted to thank all of you for sticking with me. I’ll offer more thanks later on, but for now let’s set up our BAAM.

Since I’m a very clever person and I occasionally plan these things, I’ve managed to incorporate our one year anniversary and 50th review directly in tonight’s film The Longest Day. Not only was this film released in 1962 (50 years ago…get it?), it also is all about June 6th, which is pretty close to today. For those who don’t know their major historical events, June 6th was D-Day. For those of you who are laughably ignorant, D-Day was when the Allied forces of World War II landed on the beaches of France, marking the start of the push towards Berlin. Kind of a big deal. But moving on from that little date-related cuteness, we’re celebrating our 50th review with The Longest Day and a tasty German beer (German…are you getting it, yet?) known as the Celebrator. So let’s get celebrating, shall we?

The Longest Day, which was recommended to me by the ever-knowledgeable Anne of We Recycle Movies fame, is a WWII epic in the classic sense and so much more. This sweeping 3-hour long film covers the entire course of D-Day from all sides of conflict. Moving effortlessly between spaces, the film showcases everyone from the German high command to the average footsoldier. While, at times, it is hard to keep track of all the characters in the film, the characters themselves are not what is really important. While the cast is fantastic (John Wayne, Henry Fonda, Robert Ryan, etc), what is notable about the characters is that each one feels unique and, more importantly, human. Contrary to many other war epics, the filmmakers were not afraid of showing small moments of mundanity or averageness. A vast majority of the soldiers, on both sides of the war, are not heroes. They are ordinary men put in extraordinary circumstances. They gamble, they get bored, they drink, they don’t know what’s going on. And though the film lacks the grittiness and blood of more modern WWII films, The Longest Day still manages to hold its own when it comes to character. 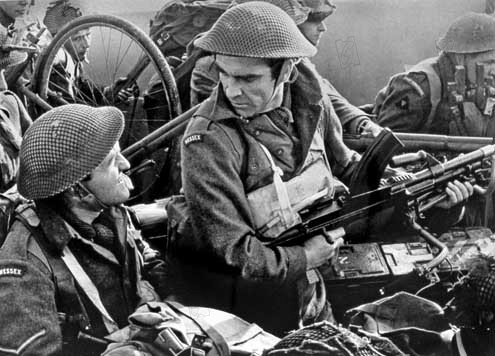 But what this film is really about is visual scope. Holy crap, it’s insane. In a time before computers did the heavy lifting for filmmaking, everything that a director wanted on camera had to actually be there. Sometimes we forget this when we watch older films, but when you stop to think about it, there had to be thousands of extras running through explosions and gunfire on an actual beach during production. It’s incredible. One shot in particular, during the assault on Ouistreham, lasts a least a minute without a cut and arcs across an entire city filled with extras actually engaged in battle. Buildings explode. Men die. The camera crosses a river. It’s really just impressive. Another point I’d like to note for this film is its “fairness” to both sides of conflict. While I don’t think anyone would argue that the Nazi’s have been discriminated against in their cinematic portrayal, it was refreshing to see a take on the German military that was not monochromatic. Throughout the film, German officers express their frustration with Hitler’s leadership and lower ranking soldiers actually express their opinions, rather than just saluting and shooting guns. Rather than presenting the usual faceless demons of the Nazi military, the audience is given human faces and personalities to attach to the warmachine. Even more interesting is that the Germans actually speak German! Unlike many other war movies of the time, characters actually speak their native languages and the audience is left to deal with subtitles, which I appreciated.

But now I’m rambling a bit. Overall, I enjoyed this film far more than I expected. Sure it feels a bit long with a 178 minute running time, but it remains quite captivating throughout. The characters are rich, the action is strong, the scope of the film is immense and it’s easy to watch. What’s not to like?

Always the badass, even when his soldiers push him along in a cart like a wuss.

And our German Celebrator? I’ll start off saying I really should have had two these. Three hours is a long time to nurse one beer. I probably made it 30 minutes before I went dry, so bare with me as I try to remember. The Celebrator, which comes adorned with cute little goat charm on the bottle’s neck, is a doppelbock, meaning it’s a stronger version of the traditional Bock lager. This brew pours almost black with hints of red when it catchs the light. With a nice, soft malty nose, the beer promises to be a tasty treat from the start. When you sip it, you gets hints of dark sweetness (think molasses) and roasted malt. Maybe a little bit of chocolate and fruit in there as well. However, the flavor isn’t overpowering and the whole thing goes down remarkably smooth. I know I say this about a lot of beers, but this one was particularly easy-to-drink. I could have easily drank a few these without feeling overwhelmed (though I’d be a bit tipsy). And if, for some bizarre reason, you don’t trust my opinion, BeerAdvocate gives it some of the highest ratings I’ve seen on a beer, and those guys actually know what they’re talking about.

So that was our celebration! While we probably should have had one or two more Celebrators, I still managed to have quite an enjoyable evening. And though The Longest Day was the longest movie I’ve done for BAAM, I didn’t ever get that bored or lose interest. The film manages to keep track of so many moving elements, distinct characters and large action sequences that you never really tire of what the film is offering. It’s a bit of a commitment to watch, but maybe that’s what makes it worthwhile.

I want to thank all of you for sticking with me here at beer and a movie. I never really imagined doing this for a year or hitting 50 reviews. A lot has changed for me since that first review but BAAM has been one of those constants that has kept me on an even keel. I truly enjoy doing these reviews and getting your feedback makes it even more worthwhile, not mention it’s a great excuse to drink good beer.

Please don’t hesitate to send me comments, critiques or suggestions for future reviews. If you haven’t already, make sure you subscribe here on WordPress or through the Facebook page. You can also follow me on Twitter @beerandamovie1.  And be sure to tell your friends, because drinking alone is a little sad.

And, as always, keep drinking my friends!