Off the fantastic suggestion from my brother (accompanied by an appropriately amusing reddit thread), tonight’s film is the childhood throwback Hook. And while tonight’s Bootlegger beer was initially going to be paired with another pirate-themed movie, Hook just seemed like too good of an opportunity to pass up. So let’s fly into tonight’s combo, shall we?

Okay, fine let’s talk. I think everyone has a few formative movies from their childhood. For me, that list includes movies like Back to the Future, Hot Shots Part Deux (I know, right?!) and the 1991 Steven Spielberg Peter Pan re-imagining Hook. Not to be on-the-nose about these things (though the film is), there is something magical about Hook. It is so full of fun and imagination that it is hard to not fall in love. The make-believe feast scene is still arguably one of my favorite cinematic moments ever. You have Robin Williams (in one of his more bizarre roles) trading absurd insults with a 10 year old boy with a remarkable hairdo, followed by the flying of brightly colored mush food. It’s awesome. But seriously, there’s a lot to love about this film. Most obviously, at least as an adult, is the realization that Dustin Hoffman plays Captain Hook. Doesn’t that blow your mind? And really he’s the best part of this film. Hook is evil, funny, truthful, deceptive, paranoid, insecure and hawkish. Not to mention he desperately wants to start a war with a bunch of kids whose biggest crime is that they splatter the occasional pirate with eggs or with the aforementioned brightly colored mush food. And his sidekick Smee (Bob Hoskins) is also incredibly amusing and adds another layer of depth to Hook’s egomania.

And as much as I love this film, I feel like I should share a few of my complaints. For one, it’s really really long. Coming in at about 2:15 hours, the film trudges along at times. It doesn’t take long for us to realize that Robin William’s character Peter Banning is a terrible father, but it takes forever for the film to move beyond that. Also, the film takes forever to build up Banning’s transformation into Pan but the actual moment of change is shockingly fast. And no sooner does Banning become Pan than we’re suddenly at the climax of the film. As a result, it can get easy to tune out in the middle of the film as you wait for the more awesome scenes to come around. And finally, as I kind of mentioned earlier, the film is painfully on-the-nose with the Peter Pan references. While most kids probably don’t get the wordplay, the film’s dialogue is about 35% obvious foreshadowing (“Gotta fly!”), with another 10% revolving around the famous Pan line “to die would be an awfully big adventure.” As it turns out, life turns out to be a grander adventure but you get the idea. To the sophisticated (re: awake) viewer, all of the obvious referencing starts to grate on your nerves and can pull you out of the otherwise fantastic experience. But overall, these are minor gripes when you stack them against a film this is, for all intents and purposes, pure entertainment that really never gets old.

One of the most beloved side-characters of all time. And he barely speaks!

And our Bootlegger beer? Well this Rustic Rye IPA was actually pretty tasty. I was a bit full from dinner, so drinking an entire bomber by myself proved more difficult than anticipated but I don’t blame the beer, I blame my beer-gluttony. Anyway, for those who have never tried a rye beer, I suggest you give them a shot. Just like how wheat beers are brewed with a higher percentage of wheat to barley, rye beers are brewed with a significant amount of rye. The primary result of this added ingredient is unexpected smoothness while still upholding the original, intended flavors of the beer. Since this beer was technically an IPA, the final result is a very well-balanced beer that still retains that classic IPA hoppiness. Now obviously it can’t be as hoppy as other “truer” IPA’s, but you still get the effect, which makes it a good intro to the IPA genre. As an added incentive, this Rustic Rye IPA sits comfortably at 6.5% ABV, making it easy and socially responsible to drink…more or less.

So there you have it folks, an evening with everyone’s favorite bootlegging pirate, Captain Hook and his favorite bootlegged liquor: beer. Actually, I think pirates are more into rum but just work with me here, okay? Anyway, the movie is still a classic and is tons of fun even when you’re all grown up. And since you’re a grown up, why not reminisce about your childhood with a solid, smooth rye IPA? I can’t think of a good reason why not, so better get to it. Time is running out. Tick tock tick tock. 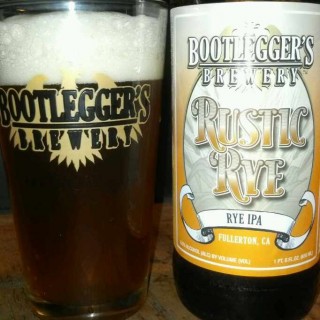