Buffalo Bill’s Pumpkin Ale & The Silence of the Lambs

Nothing says Fall quite like pumpkin beer and serial killers. Well…I may need to reassess that one. Anyway, I’m trying to get back into the swing of things here with BAAM so I thought it would be a smart idea to get back to our roots by reviewing a “real” movie and blind tasting what Buffalo Bill’s brewery claims to be “America’s first pumpkin ale.” So put down that glass of Chianti (mmm…fava beans), we’ve got a review on hand!

The 1991 Oscar powerhouse thriller The Silence of the Lambs, directed by Jonathan Demme (who only makes rockumentaries and the intense drama), is one of those movies you really shouldn’t miss. Everyone always talks about classics or must-see movies, but The Silence of the Lambs is really one of the few films from the past thirty years I feel comfortable putting under that heading. It is intense, gripping, frightening and haunting. It’s visually striking, narratively engaging and expertly acted. What is truly remarkable about this film, especially when compared to like-minded thrillers, is that it cares so much more about its characters than it does about the case. While the case is interesting in a sickening sort of way, the most chilling scenes are when Clarice (Jodie Foster) and Hannibal (Anthony Hopkins) simply talk. Their dialogue immediately gets under your skin and leaves you thinking. There’s a perpetual sense of unease that permeates the film and it leaves the viewer feeling edgy. I’ve seen this film a number of time now but I still got a certain tightness in my chest while watching. Not many movies can do that to me. 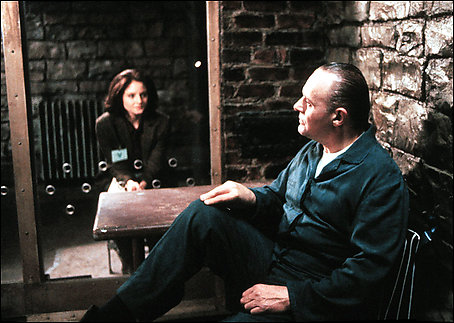 There’s a lot to discuss in this film but I don’t really have the time (or your undivided attention…let’s be real here) to go into detail. However, I do want to briefly point out the use of close-ups throughout the film, as they appear quite regularly throughout. Demme treats us to long, uncomfortably close close-ups of our characters’ faces while they talk. Not only does this connect us to the character, it also forces us to see every detail in their facial expressions. We have no choice but to study, examine and dissect, much in the same way Hannibal Lecter sees the world. It’s real creepy. Other than that, my only complaint is that I was never fully convinced as to why Clarice was really put on the case. Yes, she’s young and attractive and a fresh face for Hannibal, but I feel like the film doesn’t really go beyond these easy, one-line answers. Granted the rest of the movie is so good that it doesn’t matter but I feel obligated to gripe about something. Anyway, go see this movie. Even those viewers who have weaker constitutions shouldn’t find this one all too offensive (it’s only a little bloody/gory/disturbing). This movie isn’t too concerned with the spectacle of blood and is more attuned to the psychological experience of our characters, which is a nice change of pace from today’s blood-thirsty thrillers. But most importantly, this movie is really f-ing good.

That’s Buffalo Bill, in case you missed the BAAM connection. He kills people.

So was “America’s First Pumpkin Ale” a classic as well? Well, based off of the beer alone and disregarding history, I have to say no. Buffalo Bill’s Pumpkin Ale is good, but in a world where everyone makes a pumpkin beer, this one does little to stand out. Pouring a nice, clean amber color with minimal head, you get the standard notes of cinnamon, nutmeg and pumpkin that you’d expect. When you take a sip, you get a little of all of those but nothing too striking or sustaining. It’s all quite mellow and smooth actually. Which is nice if you’re planning on making a night of it and having a couple more later on. But as a standalone beer, it does little to set itself apart from the crowd (and it is a crowded field of pumpkin ales). Don’t get me wrong, nothing about this beer is bad, I just hate to admit that it does nothing special. Sorry, Bill!

So there you have it folks, Fall! Killers and beer! A cinematic classic (seriously go watch or rewatch it. It’s still amazing) with a brewing…meh. Okay so not the greatest pairing but still a worthwhile evening. Great movie. Decent beer. Cooling weather. Doesn’t sound all that bad to me. And now if you’ll excuse me, I have a bottle of Chianti with my name on it.

Just kidding, I wouldn’t cheat on you guys like that. 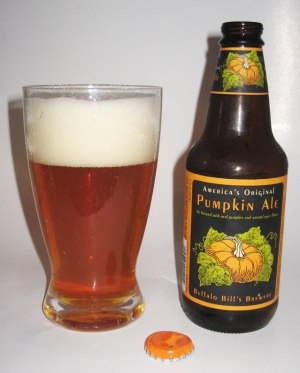 The Silence of the Lambs:
-Outstanding performances all around
-Great visual storytelling
-A thriller in the truest sense