On this Halloween, BAAM and We Recycle Movies revive our tradition our providing asinine commentary on holiday slashers whilst drinking beer. Pretty good, schtick, right? On the menu we have the dubious Halloween Resurrection and two arbitrarily-chosen yet thematically appropriate beers. And when you’re done reading this fine review, I suggest you hit up WRM for Anne’s perspective on the experience. Most likely it’ll just be her judging me. But let’s get to it, shall we?!

Due to some unfortunate scheduling mishaps, Anne and I didn’t get to both of the films we wanted to but that’s okay, the 2002 film Halloween: Resurrection is what we wanted to see anyway. Briefly starring Jamie Lee Curtis, the film follows a group of teens (shocker!) as they spend the night in Michael Myers’ childhood home as part of an internet reality show created and produced by none other than Busta Rhymes and Tyra Banks. Yup! Needless to say, Michael Myers isn’t too happy with this and thus proceeds to murder pretty much everyone for no apparent reason. Alternating between sneaky kills and brazen slashing, Michael Myers is probably the least thematic cinematic murderer. He pretty much just kills people, regardless of how scary it is to us viewers. And that’s pretty much the movie. Yup. 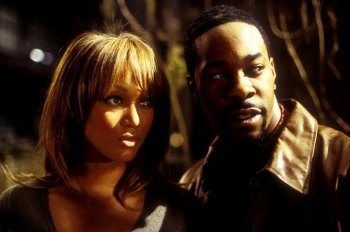 To discuss this movie further would be to shame all the other movies I’ve discussed here on this blog so I don’t want to dwell on it much longer. I do want to note that Katee Sackhoff is in this movie as someone other than Starbuck, which is upsetting. Her name is also misspelled in the credits. Oops! Also, there are boobs. Not Katee Sackhoff’s. So that kinda puts on the same level as a bunch of other slashers. But what else is there to say? Oh yes, very little of this movie makes sense. Michael Myers, as per usual, defies the laws of physics and biology.  The reality TV/POV camera conceit is only used when convenient and is largely ignored. Hmm what else? There are so many little things that frustrated Anne and myself but we just don’t have time for them here. But a good example can be found when our protagonist escapes Michael Myers and his house, only to go back inside so she can try to leave through the front door…which she knows is locked. Yup. That’s the movie we watched. Don’t bother with this one folks. It ain’t worth it. 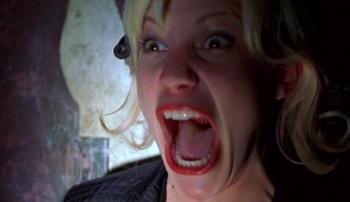 And our beers? Well those were pretty non-spooky as well. Our first brew was Hermitage Brewing’s Fruit Crate Pumpkin Ale. Despite a promising, reddish amber pour, this beer was kinda nothing. There was virtually no pumpkin aroma or taste. In fact, I don’t know what this tasted like. A bland golden ale that was just a bit bitter? And not even good, hoppy bitter. Just bitter bitter. It’s hard to classify this as a bad beer. It was more of a “meh” beer that really does nothing at all. You can skip this one.

And, sadly, our second beer was a bit of a let-down as well. Rabbit Foot’s Diabhal is a self-described Belgian style ale brewed with honey, but even that’s a generous description. I didn’t get any of that classic Belgian yeastiness . Instead, I was hit over the head with crazy honey flavor. For me, honey should be used sparingly to impart mild sweetness. But this Diabhal tasted like boozy honey with maybe a hint of sweet fruit. It was sweet on sweet and not in a awesome Halloween candy kind of way. There was almost no malt or hop flavor in fact. As Anne noted, this beer seemed more closely related to a honey wine (mead) than it was beer. Lame.

So there it is folks, a bad movie with some disappointing beers. Can’t win them all I guess. I’d say it’s hard to know what a good beer is unless you’ve had a bad beer or two, but the more I think about that statement, I realize how stupid that sounds. Hand me an Old Rasputin any day and I’ll be happy man. Screw the rest!

Once again, a special thanks to Anne from We Recycle Movies for taking the time out of her insane schedule to enjoy some mediocrity with me. Please go check out her blog and show her a little BAAM love.

Happy Halloween! And as always, keep drinking, my friends!