In honor of 12/12/12, Anne from We Recycle Movies and I celebrated the only way we know how: drinking great beer while mocking a movie we’re barely watching. Great premise, right? And since the date was too significant to be subtle with our pairing, we chose Stone’s final Vertical Epic and the tidal wave of cinematic crap that is Roland Emmerich’s 2012. So let’s get crackin’!  (that’s a joke about 2012…because the planet’s crust cracks a lot and earthquakes happen…I’m funny, I promise)

But where to begin with 2012? How about 2009? Sure, why not. That’s when SCIENCE determeined the Earth was going to blow up or melt or split apart or whatever. Briefly, 2012 charts the Earth’s Mayan-fortold demise as told through the eyes of a bunch of random people we never really care about. I think the planet’s core is melting because the planets are aligned and thus the Earth’s crust is thinning and shit gets real…I think. To be fair, Anne and I were loudly ignoring this film and instead mostly talking about the new trailer for Pacific Rim (which I contend looks like a shiny version of Godzilla vs. Voltron). We also talked a lot about Zoe Saldana who, we later realized, was not in this movie. We’re not racists but in our defense, Thandie Newton really looks like Zoe Saldana. But I digress. 2012 has all the elements of a “good” disaster movie, such as explosions, famous landmarks being destroyed, conspiracy theorists, black actors, giant boats…. You know, the usual. However, I think Roland Emmerich got so caught up in his own delusions of Earth’s grand demise that he forgot to make the rest of the movie. 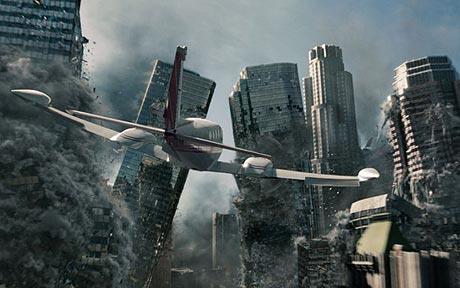 But to be serious for just a (brief) moment, I think the major failing of this movie is really its characters. I didn’t really relate to any of them or find them interesting. They felt more like characters I was supposed to like, not characters I actually liked. It’s an assumption that can really just hollow out a movie’s emotional core. Fortunately, the movie had plenty o’ splosions and other natural atrocities to compensate for my boredom. But even then, the over-the-top destruction of the planet is also distancing. I couldn’t connect. There are only a handful of moments when the destruction resonates on a personal level, making the “we survived!” conclusion even less compelling. Finally, as noble as Roland Emmerich’s “Africa-is-the-birthplace-of-humanity” overtones are, it’s so obnoxiously blatant that you can’t help but laugh. Well…continue to laugh, since I pretty much laughed at this whole movie.

Who needs human drama when you have SUPER VOLCANOES?!

Good thing we each had bombers of 9% ABV Vertical Epic to get us through the night! The last of the series, the 12.12.12 Vertical Epic does feel like a pinnacle of beer. It pours a deep, dark brown with a lovely mocha-colored head. While Stone’s label rattles off a host of spices brewed with this Belgian-inspired ale, the most distinctive notes I tasted were chocolate malt, all-spice and cinnamon. That last one really came out as the beer warmed, transforming the beer into something completely new by the end of the bottle. And although the beer was dark and strong (what other kind of beer does Stone brew?), I have to say that it’s remarkablely accessible. The beer was easy to drink, not too bitter and not too filling either. Sure, it’ll get you buzzed, but you won’t really notice the booze unless you’re drinking on an empty stomach (which we were….woops!).

Overall, I’m really glad I got to taste the final Vertical Epic. Sadly, I’ve missed the previous Vertical Epics but I don’t doubt that Stone has plenty of good beer planned for us in the years to come. Or days, if the Mayan calendar (or Roland Emmerich) is correct. Either way, you better make sure that you’re friends with a pilot. Or John Cusack. Either will do.

Thanks for reading and as always keep drinking, my friends.