In celebration of the release of The Hobbit, we’re taking a look back at the film that started it all while drinking a hearty beer worthy of even the dwarves of Middle Earth. Yes, tonight we’re watching The Fellowship of the Ring and sipping on a bomber of Eel River’s Raven’s Eye Imperial Stout. And as in any journey, we have a lot of ground to cover, so let’s get started!

It’s been awhile since I last saw The Fellowship of the Ring and I think I’ve been long overdue. Do you realize that this was released over ten years ago? HOLY CRAP! And that’s pretty much my sentiment for this film. HOLY CRAP! In the best of ways. I know that the entire trilogy was been widely praised and studied but when you step back from it all, it’s just great to take in a movie of such a high caliber. I’m largely skeptical of fantasy and science-fiction movies these days (though the genre is my all-time favorite). I find that films generally get themselves so wrapped up in their own “how cool is this?!” factor that they forget to tell a story. And while LOTR gives itself a generous three hours to help explain a massive universe and most of the plot of The Hobbit, it does give the characters space to breathe. Yes, the plot centers on an unlikely band of friends who have to carry a magic ring into a volcano, lest evil consume the world, but all of that is grounded in a fully-realized world populated by fully-realized characters. Sure, we don’t get a complete look at each character’s relationship with one another (that’s why there are three movies!), but we are treated to such a well-crafted foundation that we don’t mind the leaps in character and story that we are asked to make.

Definitely BFF’s. But at least we get why!

My only real complaint is that our sense of temporal relationship is very loose. What do I mean by that? Time, in terms of days and weeks, is very loose and can be a bit confusing (if you’re looking for it). Example? In the few days (?) it takes Frodo n’ Company to reach the village of Bree, Saruman manages to create a massive war-machine and army. It just seems a bit sudden. And why does Gimli think his cousin is still alive when Gandalf clearly knows that everyone is dead. Not to mention the decayed corpses. Clearly this was nothing recent. Sorry, I’m nerding out a bit hard. But since we’re on the subject, the only other non-complain I have is why  is Aragon able to fend off the Nazgul on Weathertop? Why are they afraid of fire and swords? It doesn’t really make sense. They’re like ghostly-zombie super soldiers. Then again, I also don’t really care because they’re badass. Needless to say,  this movie is damn good.  The visuals are stunning. The production design is immaculate. The acting is heartfelt and the dialogue is engaging despite the unfamiliar syntax. Simply put: it all just works. Peter Jackson knows how to make a f’ing movie. 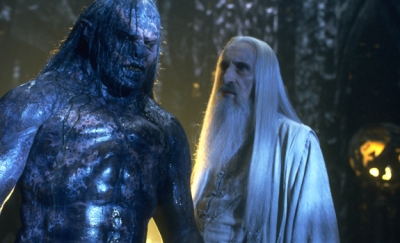 I’m glad you could make it here on such short notice!

And did our beer stand up to the fires of Mount Doom?! I think so! (Nerd fact: the amazing fantasy series The Wheel of Time also has a Mountain of Dhoom! The “H” is intentional). This California Imperial Stout is no joke. Brewed by Eel River, which claims to be the nation’s first certified organic brewery (do I really care?), Raven’s Eye pours a deep black with an almost coppery-chocolate head. While there’s a bit of carbonation, the drink itself is surprisingly smooth. With a hearty malt backbone, there is almost no booziness to taste despite the 9.5% ABV that, to be perfectly honest, has got me a bit tipz. With just a hint of sweet vanilla for an added bit of complexity, Raven’s Eye ends up being a very solid Imperial Stout. While it does little to “blow your mind,” it does a great job of just being a solid stout that warms your bones. Which, in my opinion, is all you need when you’re curled up with some LOTR.

So that’s it folks. My feelings on the night? 1) It’s far too long since I’ve seen this film. 2) Eel River’s Raven’s Eye Imperial Stout is definitely a “buy-again beer” 3) I really want to watch the other two LOTR movies but I don’t have the 9 hours to spare. But in all seriousness, this was a great evening. A hearty, slow-sipping beer with a long and beautiful fantasy epic. Definitely a combination I’d recommend. What an unexpected journey!

…see what I did there?

Oh and you’re probably wondering what in Gandalf’s name the connection is for tonight’s pairing. Well, if you remember, the Dark Lord has many spies. Including ravens…that’s it. 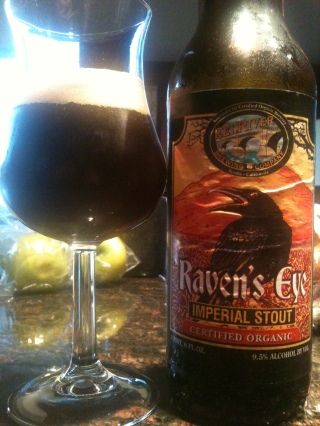 The Fellowship of the Ring:
-Beautiful in almost every cinematic way
-Sense of time is a bit wishy-washy
-MUST.WATCH.MORE.LOTR!