Put down your drinks and put the pedal to the metal, because today’s BAAM is all about that checkered flag (also because drinking and driving is illegal & super dangerous)! We’re sipping on Alesmith’s delightful Speedway Stout and watching the 2010 racing documentary Senna. So let’s hit the pavement and roll right into tonight’s BAAM! (so many racing puns!)

As much as BAAM is about watching terrible movies in which many things explode, every now and then it is truly refreshing to engage in a film that captivates and mesmerizes. And it is only more invigorating when that film is an artfully done documentary that so beautifully captures, represents and respects its subject. Senna, the 201o documentary from filmmaker Asif Kapadia, is a loving remembrance to one of Formula One’s greatest legends: Brazilian driver Ayrton Senna. For the sake of disclosure, I have zero interest in auto racing and barely see the appeal of the sport. But regardless of you fall into that same disinterest category, the beauty of Senna is that it makes the viewer understand and feel the sport. The doc does a wonderful job of capturing the romance of auto racing.  The beauty, the glamour, the politics, the danger. All of it exists in this film and all of it is grounded in the painfully human story of driver Ayrton Senna. 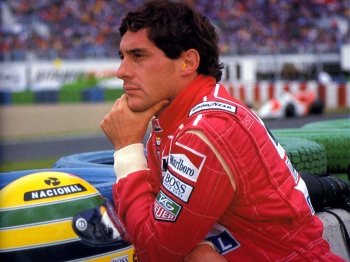 So thoughtful. So beautiful.

What is most remarkable about this film is how unbelievably true it all is. As I told my roommate, Senna’s story is something you see in the movies because it is too perfectly dramatic for real life. The young upstart driver forces his way into the Formula One scene. With his first big break, he is disqualified due to a BS technicality that seems orchestrated by his calculating rival/teammate (who happens to be French). Yet despite the adversity, Senna becomes a three-time World Champion, an international celebrity and a hometown hero. And, on top of all that, he’s a God-fearing hottie! It is literally too good to be true. But it’s all true. I’m not educated enough to decry spin or slant but to my untrained eye, the film seems objective, honest and respectful of the facts without opinion or angle. Ultimately, Senna is an exceptional film about an exceptional man.

And could Alesmith’s Speedway Stout keep up with Senna? Short answer? Yes. END OF REVIEW!

Just kidding, Alesmith deserves more than that. This Speedway Stout, brewed with coffee for extra speediness, is a jet black (oil black, if we’re keeping with the racing theme) brew with as much character as Ayrton Senna. Pouring a deep black with a modest caramel head, Speedway gives off strong notes of caramel, chocolate malt and coffee. The taste brings more of the same but despite it’s heavy color, the mouthfeel is surprisingly mild. Speedway is supremely smooth and the carbonation is mild, making this the ultimate sipping beer. That and the 12% ABV. I mean, I’m not a fast drinker by any means but I was still drinking this 2 hours into this bomber. Big beer and big alcohol require a more leisurely pace, in my opinion

So while drinking a stout in a warm Los Angeles spring may not be the best idea, this beer ended up being the perfect companion to Senna. Both are rich in character and best enjoyed slowly. You don’t have to like Formula One racing or stouts to get into these bad boys either. While they offer something to the seasoned fanboy, they area also wholly accessible to the casual consumer. Maybe Senna is more easily accessible than Alesmith’s Speedway, but that’s mostly because driving really fast will always be more awesome than anything. Other than spaceships. Spaceships are the best.

So there you have it, Drinkers. A night of speed! Of action! Of character! But seriously, all joking aside, tonight was thoroughly enjoyable. And after nearly two years of BAAMing, I have to say that Senna was one of the few breakout surprise hits I’ve had the pleasure of viewing. Good thing it’s on Netflix!

Senna:
-The glamour & drama of Formula One racing
-An accessible film to an elusive sport
-A story that defies the “too good to be true” label