Avery’s Out of Bounds Stout & For Your Eyes Only

It’s almost Thanksgiving so that means it’s time to completely ignore it and watch a random movie! In today’s BAAM, we’re continuing on our unofficial quest to review every James Bond movie ever with For Your Eyes Only and Avery’s Out of Bounds stout. The connection? Skiing! Yes, another James Bond/beer combo tenuously held together by skiing. Some readers may remember that I recap-reviewed this stout a long time ago but I figured it was time to give this bad boy its own post. Also, I just found a liquor store that sells lots of Avery brews out here and I got a little excited. Deal with it.

So let’s hit the slopes, shall we?

For Your Eyes Only (1981) is Roger Moore’s 5th Bond film and is generally regarded as a “return” to Bond basics after the 1979 release of Moonraker (spies in space!). And while nothing about the Bond franchise is truly basic or simple, For Your Eyes Only does have a remarkably simple story and a noticeable lack of fancy gadgetry. Sure there are still motorcycles with machine guns, remote-controlled helicopters and Dick Tracey-esque watch-phones (I guess Galaxy Gear would be a more up-to-date comparison), but more often than not Bond relies simply on his wits and his trusty Walther PPK.

In this film, Bond is tasked with tracking down a British missile control code machine from a sunken ship before it can be sold to the Russians. That’s actually it. Just a good old-fashioned Cold War plot. But like any self-respecting Bond flick, the narrative takes us through the beautiful backdrops of Cuba, Greece and the Italian Alps. And also like any self-respecting Bond flick, the movie features car chases, ski chases, ski jumps, submarine fights, scuba fights, cliffside fights, shark attacks, hockey fights (don’t ask) and, of course, crossbows. I think the main reason this film gets away with such a stripped down plot is simply because the film is largely action sequences. Yes, story is peppered throughout the explosions and chases, but mostly it’s just visual candy. And it’s some sweet-ass candy, if I do say so myself!

Of course there are the usual logic and emotional bumps along the way. Like why Bond’s enemies always choose the most outlandish and least-effective methods of killing him. Or why a Greek smuggler allies with Bond so readily. Or why a really young figure skater wants to bang every older man she can get her hands on (and why is she even in the film at all?). Or, most importantly, why Bond lets  a Russian general, intent on buying a piece of valuable British military hardware, just turn around and fly home? WHY?! But you really can’t let yourself get bogged down in these kinds of questions of logic or reason or sense, otherwise you’d never enjoy the movie. And Bond movies, at their core, are simply meant to be enjoyed. Nothing more, nothing less. 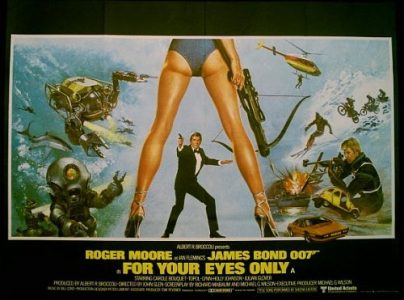 When movie posters were blunt

And how about our Out of Bounds Stout from Colorado’s own Avery Brewery? Was it similarly action-packed? Well, it was definitely malt-packed (that’s a thing now, go with it). Pouring a gorgeous chocolate-colored two-finger, this stout is black as night! I held it up to a light (as I usually do) and barely any light passed through. With a sniff, you’ll get strong notes of chocolate, coffee and toffee that will have you drooling. And you’ll get those notes again when you sip, but they’re remarkably well-balanced. Moreover, the mouthfeel is super smooth. Combined with a low ABV 6.3%, the result is a delicious beer that is easy drink and will be reliable over two or three bottles. Definitely a winner.

So there you have it, folks. An out of bounds pairing with For Your Eyes Only and Avery’s Out of Bounds Stout. A big, punchy combo that goes down easy and is perfect for these chilly nights (by Los Angeles standards).