In today’s BAAM we’re getting a little weird. A little wild. We’re sipping on the American wild Prairie Gold while watching the Korean flick The Good, The Bad, The Weird. A pairing of excitement! Of action! Of…strangeness! So let’s get started!

I’m sure I’ve mentioned it before, but Sergio Leone’s The Good, The Bad and The Ugly is one of my favorite movies of all time. So when I heard of an action-drive Korean reinterpretation set in 1940’s Manchuria, of course I leapt at the chance to check it out. Nevermind that this movie came out seven years ago and nevermind I’ve seen it before, I thought The Good, The Bad, The Weird would be appropriate selection for our pairing. And so here we go.

Simply stated, Jee-woon Kim’s 2008 film is about a number of parties aggressively tracking down an elusive treasure map. No one knows what the treasure is (probably gold), but everyone is certain it is valuable. The Ugly wants to get rich. The Bad feels entitled to it. The Good wants to catch the Bad (and the Ugly) for the reward. The Ghost Market gang…wants it too? And so does the Japanese army? It really doesn’t matter why everyone wants it, just that they do. And when you have lots of unstable people with guns all seeking the same thing, chaos ensues. And that’s pretty much what the movie is: a two hour long action sequence punctuated with brief character beats (often defined by more violence). Seriously, the last 30ish minutes of the movie is a straight up Fury Road desert chase filled with cars, motorcycles, horses, mortar fire, guns, knives and a medieval flail. 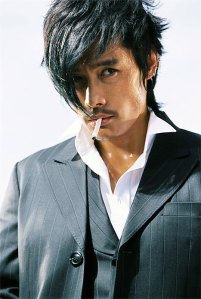 The hair says it all.

But really what makes this movie special, aside from the general silliness, is its craft. With strong visuals, a striking sense of style and absurdly detailed action, the movie never stops exciting your senses. And just when you feel worn out from too much frenetic action, you’re given a break. A marketplace shoot out, which carries on with a frenzy, takes a short break for our characters to chat and smoke a cigarette before the film returns to its regularly scheduled insanity. It’s smart, fast and impressive throughout. Only at the end of the film, when we build to our Mexican standoff, does the film slow down. But by that point, you’re so worn out that you don’t mind the breather. Overall, it’s just a silly, hyper-violent romp through the tumultuous history of Korea under Japanese rule. Sounds like fun, don’t it?

And how about our Prairie Gold? Did we bring home a treasure? It was actually a pretty solid beer. Maybe a little pricey for a 500 ml bottle but it’s what’s on the inside that counts, right? This American wild (aka bottle conditioned sour) pours a light golden color with a fast-dissipating white head. A few reviews say this beer can be a gusher when opened but I didn’t have this problem (but fair warning). Off the nose you’ll get all of the tart fruity sweetness you’d expect from a sour. When you sip, you’ll get notes of pear, lemon, green apple, white wine and yeast. It never gets TOO tart and it can actually be a bit sweet for some, but the finish is quick, leaving you feeling refreshed on a warm summer night. With a mild 6.5% ABV and light carbonation, this beer is an easy drinker that should delight beer and wine drinkers alike. A great summer sipper.

So there you have it, Drinkers. A night of gold! Wild prairie beers and wild, weird ‘Westerns.’ A good, fun night that doesn’t require too much thought. Because, if we’re being honest, everyone needs a little sweet beer and Korean gunplay from time to time.

Thanks for reading and as always keep drinking, my friends!

The Good, The Bad, The Weird
-Nonstop, expertly made action
-Thin on character, but who cares
-Great foreign reinterpretation of a classic