Now that I’m back from my East Coast holiday adventures, I thought I’d give you a brief recap of all the beers I drank and all the movies I watched. My next BAAM combo will be in a separate post in the next day or so, this way you don’t have to read too much. Because reading is bad.

(By the way, I’m doing these from memory so just bear with me)

Magic Hat #9 –
One of my favorite beers. It’s light but full of nearly inexplicable fruity flavor. Self-described as a “Not Quite So Pale Ale,” I have to agree that this a very accurate description of this Vermont Beer. Very hard to find here in Los Angeles but whenever I see it, I drink it.

Trout River Chocolate Oatmeal Stout–
A very simple but fulfilling stout. I drank this after a chilly hike in the Green Mountain State and it really hit the spot. Smooth, flavor with strong notes of chocolate. Too bad I can’t get this in LA…

Anchor Steam Liberty Ale-
A very hoppy and rich ale that may be just a hair too hoppy for my tastes. Anchor Steam does some good stuff but their beers tend to be a little more bitter, so bear that in mind if you’re going to give this piny-tasting beer a shot. Otherwise a very solid beer.

Harpoon Winter Warmer-
Along with Sam Adams, Harpoon is pretty Boston beer royalty and this Winter Warmer is definitely up to snuff. I had a few of these with some friends at a local bar and I was shocked at how smooth this dark, winter ale was. With strong notes of holiday spices and a lovely brown color, this Winter Warmer may be one of my new favorites. Again, too bad I can’t get it in LA. I’m sensing a theme here…

Samuel Adams Barrel Room Collection New World Tripel-
The shining beer moment of my trip home. Apparently, this season Sam Adams rolled out a new edition of beers called their Barrel Room Collection. These super classy beers are all sold in super classy bottles that pretty much force your hand into buying them. Seriously, see the picture to marvel at their beauty. Anyway, this New World Tripel was pretty much everything you want out of a great tripel. It was light in color, very grainy and citrusy in flavor and deceptively strong. New World Tripel is a whopping 10% ABV but it is remarkably easy to drink. For those willing to shell out a few extra bucks for a great beer and an easy buzz, I definitely recommend picking this one up. 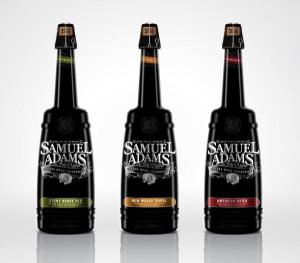 Clerks –
Kevin Smith’s first feature is a rambling, black & white, dialogue-heavy meander through the lives of a few New Jersey convenience stores clerks and the people that surround them. It’s very hard to say what this film is about as it covers topics ranging from Stars Wars, hockey, blowjobs and necrophilia. While the film is impressive in its allowance to its actors to just talk and talk and talk without the camera ever moving, the film really drags. Without a real, compelling narrative and generally annoying characters, I found myself not paying attention by the end of the film. Still, it’s an interesting bit of filmmaking from an independent standpoint, so it may be worth a watch for you cineastes out there.

Die Hard: With A Vengeance–
Yeah! A real man’s movie! Yippe Kay Yeah Motherfucker! And now that that’s out of my system we can proceed. This third installment of the preposterously  still-marketable action series marks a departure from the previous two films in that it takes John McClane (who are we kidding, it’s Bruce Willis) out of the confined spaces of office buildings and airports and out into the streets of New York City. This sprawling action film also features Samuel L. Jackson as a guy named Zeus. Yup. Anyway, this film is successful at never really letting the action die down. For the 2+ hours of the film’s duration, the audience (and Bruce Willis) get very little rest as the plot is pretty much dictated through the action (something not really done anymore). And while the film is successful at carrying us along for the ride, the ride gets a little old after awhile. For the last 30 minutes of the movie, I really just wanted it to end. I wanted Bruce Willis to kill the bad guy and save the day, but it just took him so damn long to do it! I think there was room in there for about three distinct endings to this film. But other than that, it’s hard to complain about these sorts of action movie classics. Because really, who doesn’t love explosions?

Labyrinth (well, I watched most of it anyway)-
Have you seen this movie? Be honest with me. Have. You. Seen. This. Movie. If the answer is no, stop reading and go watch it. It’s…transformative. Actually, that’s a bit of a lie but it’s still very much worth seeing, if only to see how truly odd Jim Henson really was. Oh and to see David Bowie seduce a tween Jennifer Connelly. That’s also worth seeing. That and the Bowie musical numbers where he’s surrounded by creepy little gremlin muppets. Dance Magic Dance! Oh oh oh how I could forget?! Bowie steals a baby. Yeah, that happens too. 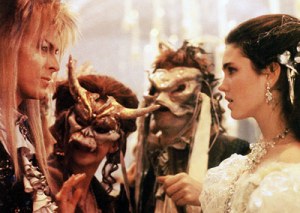 Inglorious Basterds–
I realized that I had seen this before when I started watching but it was a long flight and I had time to kill. But really, I wanted to like this movie so much more than I did. I remember hearing about it from my friends who really enjoyed it, but I only got sparse and fleeting pleasure out of this Tarantino film. Undoubtably the writer/director has a great sense of style in terms of his writing and his visuals, but as I think I pointed out in my post on Jackie Brown, Tarantino gets so caught up in his style that he loses track of what he is really trying to achieve in his story. From a narrative standpoint, this films doesn’t really go much of anywhere. It slowly and clumsily hobbles from storyline to storyline amid bouts of relentlessly witty dialogue. Now, to his credit, Tarantino does get some great performances out of his cast. Not that anyone is particularly likable at all, but the actors’ performances are quite strong. Sure Brad Pitt’s character is a bit of a caricature and The Bear Jew loses all of his terror the second he opens his mouth, but in all, I think the all-around performances really helped carry an otherwise slow film. Oh and I think I might be in love with Melanie Laurent.

Crazy, Stupid, Love–
A simple, predictable and heart-warming romcom with enough self-respect to take it easy on the “com.” Have we seen this story before? Absolutely! Do we, as American filmgoers, really care that we’ve seen this story before? Nope! When you have a star-studded cast and Ryan Gosling’s star-studded abs, it’s really hard  for this film not to be a winner. Yes, some of the performances are a bit flat (I’m looking at you Ryan Gosling, even though I think you’re great) and we pretty much know how things are going to turn out but that’s not really what this film wants to be. What this film serves more as a tasteful reminder that we should always be striving towards that impossibility of Hollywood love and romance. And it’s very successful. You kind of want to fall in love after you see this movie, as much as you secretly hate yourself for watching it. For me, it made me want to fall in love with Emma Stone (surprise!).

No but seriously, I think I might be in love with Emma Stone.