Tonight we’re kicking it old school and keeping it straight OG in Japan. I’m drinking Sapporo, a beer that dates back to 1876 and watching the original, 1954 Godzilla (OG. Get it?!) or, Gojira if your an purist. I’m not talking about the silly 1998 revamp (directed by our apocolyptic friend Roland Emmerich). Nor am I talking about the sad Americanized version of the Japanese classic. You know, the one where they just took the Japanese film, cut in a few scenes with an American reporter, and called it a new movie. No. Tonight was the original, unadulterated, purely Japanese version of Gojira and it was kind of sweet.

While Gojira is ostensibly about the threat of a nuclear-enraged Cretaceous sea monster oddly burning up all of Japan, the film itself focuses much more on the human drama and is surprisingly meditative. Aside from the obvious “atomic weapons are scary” theme, the movie is also about the debate between science and security, about love, trust and faith in your family. Visually the movie is quite remarkable and the special effects, however, cheesy, are solid. While at times Japan’s destruction looks a little like my bedroom floor circa 2nd grade, Godzilla himself looks pretty badass. Moreover, the sound that he makes is impressive and haunting. Also, he can breathe fire.

My opinion of Sapporo is a little less flattering. The beer itself is light and crisp, but lacks any strong or defining flavor. Within seconds, the initial rice flavor disappears and leave very little to remember it by. To its credit, I was drinking from a can which, in my opinion, is never the best way to enjoy a beer. Also, I have to say, I was able to enjoy the beer a little more as it warmed, which is unusual in my experience. While I typically try to connect our two features for the evening, I can’t say that Sapporo is really a great compliment to Gojira. It’s not a bad beer, it’s just nothing special. Granted if the beer dates back to 1876 and is still around today, it must be doing something right.

Overall, tonight was an odd combination. Gojira was a good movie. Albeit a bit slow and uneven at times, it holds up well with time. Sapporo on the other hand, did not fair so well in my memory. I’ve had Sapporo in the past when I’ve gone out to dinner and I remember it being more enjoyable. Maybe that has something to do with the food accompaniment or the non-can serving style, but I have to say I was a little disappointed. To link these two any more than their country of origin would be a stretch of the imagination.

Speaking of which, they kill Godzilla by using something called the “Oxygen Destroyer.” It apparently it removes all of the oxygen from water, splits the atoms and then liquifies them, killing everything. Now that’s science. 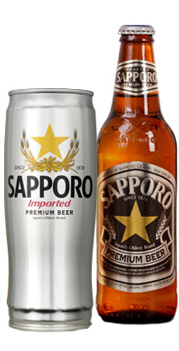 Gojira:
Godzilla looks pretty cool and sounds great.
Godzilla is simply a premise for larger, more human themes.
If Japan does it right the first time, don’t remake it…I’m looking at you Roland.