Let’s put the pedal to the metal and get ready for an excessive number of racing idioms for tonight’s combo of Speed Racer and Racer 5 IPA. So strap in, buckle up, hop in the driver’s seat, put it into drive and let the rubber hit the road!

That covers most of them, right?

So since we watched a good movie last week, I thought it would be appropriate to watch something equivalently terrible. I must warn you though, if you’re sensitive to bright or flashing colors, this review (or film) may not be for you. Seriously, the film is seizure inducing. In what we’ll assume was a “stylistic choice,” the 2008 movie Speed Racer  is more closely related to rainbow vomit than it is to cinema. Everything in the world of  Speed Racer is bright, flashing and obnoxiously loud. While ostensibly this was meant to capture the cartoon quality of the original cartoon, it mostly just ends up being distracting. I watched this movie with a few friends and between our witty criticisms, we frequently remarked “OOOO LOOK AT THE COLORS!!!!” and “what’s happening again?” But if colors aren’t the type of thing to get your riled up and annoyed, don’t fret! There’s plenty more in the movie that you can upset you!

There’s things like the rote dialogue, the stiff acting, the obnoxious kid brother/chimp duo, the incomprehensible driving sequences, physics, the talking head dialogue wipes, the purposefully cheap CGI…oh and Christina Ricci’s wardrobe. Who wears knee-high leather boots/heels while flying a helicopter?!  But at the very least, you get to see Korean pop star Rain (full name) kung-fu some people! And Matthew Fox is a ninja. Who knew. Consolation prize?

But seriously, the only thing this film does well is emulate the cacophony of mediocre Japanese animation. But since this is an American film from 2008 and not a Japanese cartoon from the 1960’s, it mostly just feels like an insincere sham as opposed to faithful update to the once-popular TV series/manga. Moreover, most of the stylistic choices in this film, from its odd cross-cutting to its bizarre changing animation styles, end up being more distracting that helpful. The end result is a visually exhausting pile o’ poo laid on top of an entirely predictable and boring plot. Go Go Speed Racer!

Thank goodness our beer wasn’t garbage! In fact, Bear Republic’s Racer 5 (get the connection?) IPA was quite wonderful. This wheat-colored IPA pours a modest head and gives off some of that classic IPA hoppiness. With your first sip, you’ll find that despite that hoppy smell, the beer itself is not too bitter or piney. Yes, it still has that pine and citrus flavor you find in all IPA’s, but it’s not as strong as you’ll find in some others. And underneath that, you’ll get a little malt backbone and almost no booziness despite the 7% ABV. As a result, you get an IPA that’s well-balanced and easier to drink than most. Actually, I was drinking it with some non hop-heads and they actually managed to enjoy themselves, which I took as a good sign. So if you’re looking for an easy-drinking IPA, maybe you should take Racer 5 for a spin.

So that’s it, drinkers.  We’ve crossed the finished line! Quite the achievement, I have to say. Especially considering that the movie was over 2 hours long and I only had one bomber of Racer 5 to split. But as much as I like to rag on this movie, I did manage to enjoy myself…since I ragging on this movie. But seriously, just being able to share some beers with friends while laughing at a movie is really all you need out of an evening. Don’t you agree?

And as always my friends, keep drinking! 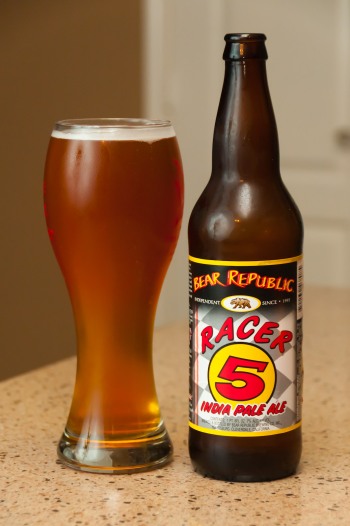 Speed Racer
-COLORS!
-Did you know Susan Sarandon is in this? And John Goodman?!
-MORE COLORS!