Ballast Point’s Victory at Sea Coffee Vanilla Porter & Pirates of the Caribbean: The Curse of the Black Pearl

Ahoy, Drinkers!I probably could have sailed around the world a few times since my last post but all that matters now is that I’m back and I’m drinking! And I’m back real hard with a hearty Ballast Point Victory at Sea Coffee Vanilla Imperial Porter while watching some silly fun in the form of Pirates of the Caribbean: The Curse of the Black Pearl. So let’s drop sail and catch the wind, shall we?Fun fact: the first Pirates of the Caribbean film, the aforementioned Black Pearl, was released over 10 years ago. 10 YEARS AGO! How bonkers is that? Compounding that crazy is the fact that Keira Knightley and Orlando Bloom (aka two of the most beautiful people around) look pretty much the same. Boy do hot people have it easy. But aside from a few dated CG moments that stand out to our modern eyes, the movie pretty much holds up. It’s simple, swashbuckling fun thanks almost exclusively to Johnny Depp (and Geoffry Rush. He’s kinda amazing). Aside from the sword fights and explosions (of which there are plenty), the movie is really held together by Depp. His Captain Jack Sparrow is funny, confident, self-interested and unfiltered. For such a popcorn movie, it’s a surprising display of acting ability. Especially when compared to his very attractive co-stars who sadly can not keep up. 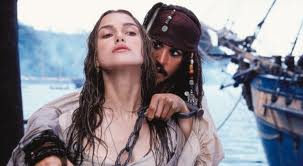 And while many of the emotional and character beats throughout the film make no sense whatsoever, the even pace and remarkable comprehensible plot help us suspend all manner of our disbelief. I mean, if we’re rolling with cursed quasi-zombie pirates, then why shouldn’t Orlando get the girl? Or why shouldn’t Jack Sparrow get spontaneously let go moments after avoiding his own hanging? Sure. Why not. Whatever. But really, overall, this movie is good bit of fun. I can’t speak for the rest of franchise (as I’ve actively avoided it) but for some glamorized pirate fun, you could do a lot worse than The Curse of the Black Pearl.*Fun side note, the curse in the film actually has nothing to do with the Black Pearl. The curse is tied to Cortez’s Aztec gold which is stowed away in a cave. The Black Pearl is just a remarkably fast ship with raggedy sails. The more you know!

Also, this movie is a weird costume drama

And our scurvy-fightin’ brew? Well, for starters, this beer would not cure scurvy. There is no vitamin C in it, as far as I know. Also, it’s not rum, so it’s not exactly a pirates favorite drink. But that’s all besides the point. Ballast Point’s Victory at Sea Coffee Vanilla Imperial Porter (bit of a mouthful, ain’t it?) is just another example of this brewery knocking it out of the park. As I’ve said in the past, Ballast Point is one of my favorite breweries not only because they just make good beer, but also because make interesting beer. And while coffee or vanilla porters are not that unusual, the delicate balance of those flavors is this dark beer is truly impressive. As you’d hope, the porter sports strong notes of chocolate, malt and coffee grounds. But balanced out with those stronger, more harsh flavors is the light sweetness of vanilla with just a hint of a coffee kick. And it all goes down smooth with a thick, almost chewy texture (that’s a good thing in this case). With a 10% ABV, it’s a wonder this beer doesn’t taste too boozy on top of all of these other flavors. In fact, the alcohol can sneak up on you, so I’d recommend sharing a bomber with a friend, unless you have a sober friend to helm your ship back to port. Overall, it’s really a great brew for you dark beer fans.So there you have it folks, BAAM is back on the high seas of occasional beer-blogging. We had a fun, light movie with a fun, heavy beer. A good balance for when you’re trying to get back in the groove. Hopefully I’ll be posting a little more frequently now so, if I’ve won you back, stay tuned for more!

Pirates of the Caribbean: The Curse of the Black Pearl:
-Johnny Depp
-Pirates
-Keira Knightley (need I say more?)

Tonight’s review comes courtesy of my brother, Jesse. Since he’s a dedicated BAAM reader, he decided to pick a beer I’ve already reviewed…for a second opinion! Enjoy! Or don’t. This really isn’t his thing anyway.

Tonight you are in for a treat, as your intrepid, indefatigable author has handed the reins to me, his older, significantly better looking brother.  Will I crash and burn and take down BAAM with me, or will my prose be so enlightening, so utterly indescribably wondrous that you, the faithful BAAM reader, will abandon Gabe for the charms of his senior?

Ok, probably none of the above.  With that longwinded introduction out of the way, and with my sincerest apologies in advance, tonight’s pairing is in keeping with the traditional October theme of Halloween spooks… and beheadings.  That’s right, tonight we review Tim Burton’s Sleepy Hollow and Rogue Dead Guy Ale.  A fairly obvious pairing, but hey, this is my first BAAM.

You may be familiar with this story from your school years, or have seen Burton’s 1999 adaptation, starring Johnny Depp as Ichabod Crane, a New York police constable sent to investigate a series of gruesome murders in the town of Sleepy Hollow.  The film also stars a silent yet terrifying Christopher Walken as the Horseless Headsman (in his head-inclusive scenes). 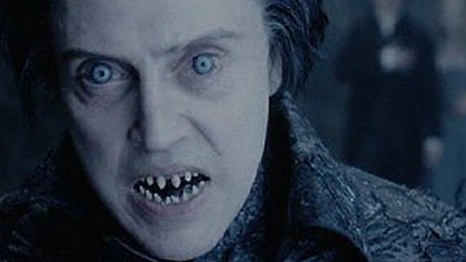 The movie certainly does not shy away from gore – Burton revels in the separation of heads from shoulders – yet I found the most cringe-inducing scene to be the bloody tree of death.  Beyond the gore, the scenery, lighting and muted color pallet sets the mood wonderfully for this entertaining thriller that still manages to not take itself too seriously.  As a non sequitur, Harry Potter fans will notice several side characters featured here: Miranda Richardson (Lady Van Tassel/ Rita Skeeter), Richard Griffiths (Magistrate Philipse/ Vernon Dursley) and of course Michael Gambon (Baltus Van Tassel/Professor Dumbledore). 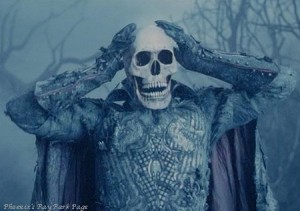 Nearly Headless Nick can suck it!

And what of Rogue’s Dead Guy Ale?  It was a tasty, medium bodied ale.  While it has a strong hops undertone, it did not overpower the other flavors.  Smooth to drink, with a bit of sweetness behind it as well that reminded me of a Magic Hat #9 (though not as fruity).  I’d recommend Dead Guy for anyone seeking a unique beer that doesn’t veer too far away from what you expect out of an ale.  Finally, to those keeping track, yes BAAM has reviewed this beer before, but hey, I’m a guest blogger.  Cut me some slack.

Thanks for reading, BAAMers, and thanks little bro for the guest post!

Once again, a special thanks to my brother Jesse for this review. Assuming he didn’t instill violent discontent in you, the readers, maybe we’ll bring him back in the future. Stay tuned later this week for another Halloween special featuring Anne from We Recycle Movies. Keep drinking, my friends!