It’s that time of year again! The time when we give the people we love chocolates, flower, teddy bears and other a host of other heart-shaped paraphernalia. It also means it’s time for the glorious return of the awful slasher movie review from both myself and We Recycle Movies. If you remember last year, we watched both versions of the terrible mining-slasher My Blood Valentine. But sadly (or thankfully), there are a limited number of Valentine’s Day-themed murder movies out there, so Anne & I settled for the only one we could find: Valentine. And in keeping with the theme, I also grabbed two bombers of Alesmith’s My Bloody Valentine Ale (wish I had those last year…). So with our beers in hand, our movie before us and our attention elsewhere, we begin our evening!

For starters, Valentine is a crappy 2001 movie about spurned love and heavily features Denise Richards’ chest. Taking place over what we assume to be the days running up to Valentine’s Day, a group of girls (and a bunch of other randos) are murdered by someone in a cherub mask with a perpetually bloody nose. Unlike most other slasher movies, the killer has no weapon or choice and does not have superhuman walking speed/teleporting capabilities. Rather, our killer is, we assume, just an average psychopath. How refreshing…Actually that’s a lie, it’s not refreshing. Most of the murders feel arbitrary and the main spook device, a creepy Valentine’s Day card, is quickly abandoned in favor of…well nothing. The result is a fairly average movie with overly-extended suspense scenes that largely conclude with kills we don’t really understand.  Moreover, the low quality of the writing and acting doesn’t really engender any concern for these characters. 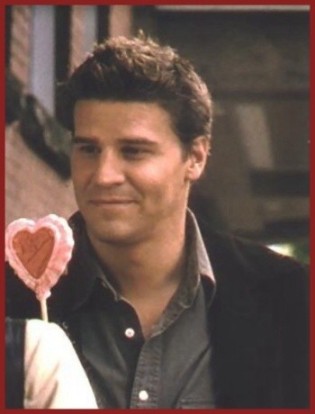 I’m actually wracking my brain to think of more things to say about this movie but it’s kinda of challenging actually. The movie is just bad for all the expected, boring reasons. Poor writing, poor story, poor acting, poor editing…the usual suspects. The production design was solid…except for the creepy lips-only video art gallery scene. That sh*t was weird.  The only real positives I have for the film are as follows:

And that’s Valentine. Don’t watch it. You can do better.

This is most of this movie

But My Bloody Valentine? This Alesmith brew was actually introduced to me last week while on a visit to the West Coast brewing powerhouse that is San Diego. In the past, I’d only had Alesmith’s IPA, which had quickly become one of my IPA favorites, so I was game to test out another one of their brews. According to the label, My Bloody Valentine Ale is the seasonal cousin to Alesmith’s Halloween beer, a brew I’ll definitely check out next October. This dark red ale pours a big head and leaves behind some very pretty lacing (foam left behind on the inside of the glass). Though I find that many reds lean more towards the malty side of the spectrum, this brew hits you with some serious hoppiness at the front that is well-balanced by a sweet, malty backbone. The end result is a very flavorful and full-bodied beer that is remarkable smooth, making it very easy to drink. Moreover, the ABV, which has been carefully brewed to 6.66%, makes this a beer you can sip on for quite some time without worrying too much about the drive home.

So there we have it, drinkers. Another Valentine’s Day BAAM come and gone. Though the bad movie may have killed the romance, at least we had a beer to easy the pain.

If you have any Valentine’s Day brews or films you enjoy on this holiday, let me know and maybe you’ll see them next year! But I’m not watching Valentine‘s Day. Screw that.

Valentine:
– Inconsistent killer
-Flat writing & poor delivery
-Ending makes you scratch your head, but not in a good way

I’ve got a special BAAM for you today in anticipation of the lovely holiday  ofValentine’s Day (get it?). I’ve teamed up with my friend Anne from We Recycle Movies to bring you our first ever crossover review. For those unfamiliar with WRM, Anne reviews and compares films that have notable sequels or have been remade throughout the course of Hollywood history. And with her insane knowledge of film history, it’s always cool to see what she has to say. For this review, Anne picked the movies and I picked the beers. She chose both versions of My Bloody Valentine (1981 and 2009) while I chose Porterhouse Red Ale (aka Slaughterhouse Red Ale) and Hop Head Red (aka Chopped Head Red). She educated me on horror tropes and I educated her on the delights of beer. We both provided the (much needed) comic relief. Really, it was a wonderful evening. While my review of both the beers and the movies can be found below, please check out WRM’s review for another perspective on these terrible movies. But without further ado, let’s get killin’.

Brief set up for both these films: My Bloody Valentine is a slasher film about a murderous miner (yes, a miner. It’s weird.) that terrorizes a small, coal mining town around Valentine’s Day because he was once trapped in a mine explosion on Valentine’s Day. Aside from the killer’s signature pickaxe, he has a proclivity for putting his victim’s hearts in heart-shaped chocolate boxes. So if you get  a box of chocolates this Valentine’s Day, make sure it’s not bleeding before you open it. Okay, let’s get started on the original.

The 1981 version of My Bloody Valentine is considered to be a classic, underrated slasher flick by about six people. For the rest of us, it’s just bad. It’s generally unclear who our protagonists are and no character is likable or sympathetic in any way. In the case of a horror movie, it’s not a good sign when you really just don’t care when people die. Anne and I agreed that our favorite character was a supporting character with a sweet mustache and maybe five lines.

Best part of this movie? His 'stache.

And though this film was made in the 80’s, when horror films weren’t too wild, it’s still quite tame. Most deaths are implied and what is shown is minimally gruesome (though the old woman put in the drier was kind of gross). More importantly, this film lacked boobs. No self-respecting horror movie should be devoid of boobs. Ask Anne. She agrees. And the all-male shower scene did not make up for this failing. Really, who wants to watch ugly miners lather up? I could keep on going with my frustrations in this movie (our assumed protagonist is a dick. The murderer kills randomly. Everyone has an odd Canadian accent…), but I don’t want to bore you. Feel free to bore yourself by watching this movie, but I have to imagine you have better things to do.

Like watching the 2009 version of My Bloody Valentine…in 3-D! Actually, we didn’t watch this movie in 3-D, but this film was marketed as the first 3-D horror movie for its theatrical release. And though we watched this film in only 2 dimensions, the 3-D moments were painfully obvious. Pickaxes being thrown at the screen. Tree limbs through windshields. Pickaxes going through beds. Pickaxes going through glasses. Pickaxes going through faces. It was amusing and no doubt severely disappointing in theaters. Anyway, though this film breaks pretty radically with the original (we have a protagonist now…sort of), it did pay homage to some of the memorable moments from the original, which I appreciated. Another dead body was stuffed into a drier, none of the male characters were likable, people get pickaxe’d to the brain, the female lead is named Sarah…you get the idea. Overall, they modernized the film without alienating all six fans of the original film. They did, however, update the killer. Yes, he is still a miner but he is not the same character as the original. And now our killer apparently suffers from schizophrenia and takes medication that in no way curbs his murderous tendencies. Maybe he just had high blood pressure…Again, I don’t want to bore you with talking about this film much more but as you have probably figured, it wasn’t a very good movie. And I’m not even sure if it took place during Valentine’s Day. So let’s talk about beer. 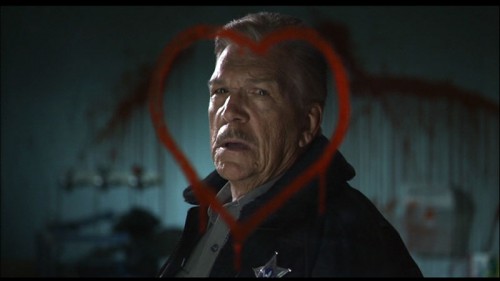 So in honor of watching two movies, and with the more practical reason of having two drinkers, Anne and I shared two different red ales. First beer we tried was the Irish beer Porterhouse Red. This beer’s rich red color belied its low ABV (4.4%) and its mediocre flavor. Now, it’s entirely possible that my bottle had spoiled as I found it to taste a bit stale and flat. Checking my experience against those on Beer Advocate, it seems like I either completely missed the boat on this one or the bottle I had was no good. Either way, it didn’t do much for me and I have surprisingly little to say about it. Though it did have a sweet pull tab cap that was very fun to open. 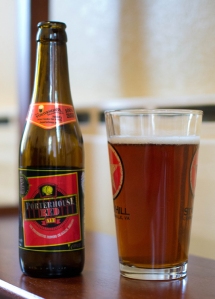 But moving on to a beer that I actually enjoyed: the Hop Head Red IPA out of Green Flash Brewing. As some readers may know, I’ve been on an IPA kick recently and trying a red seemed a natural next step on this expedition. Pouring a deep, red color, this beer smelled distinctly of IPA. That unmistakeable hoppiness comes right out in the aroma. When you taste it, you’ll know it’s an IPA but there’s something else going on too. There is a richness and a depth in it that I attribute to the redness in it. My exposure to reds is fairly minimal but I have to say that I really enjoyed this beer. I don’t think it’s much of a “beginner” beer but Anne would be in a better position to answer that question.

So that’s it, drinkers. Our first BAAM date night with WRM. Anne and I hope to do more crossovers in the future, assuming there is no public outcry. I had a lot of fun drinking these beers and watching these terrible movies. While I really enjoy doing these reviews, having a friend to share it with really makes the experience all the better, as is the case with most things in life.  And while I would recommend watching some better films,  there really is no substitute for grabbing a beer and sitting down for a movie with good friends.

Keep drinking, friends! And check out We Recycle Movies.

Hop Head Red
Distinctly IPA with something more
Robust, complex flavor profile
Not a beer for the uninitiated

My Bloody Valentine (2009)
Some boobs.
Pays appropriate homage to its predecessor
It has three dimensions.