Tonight is BAAM’s last entry from Hollywood, CA. I’m still sticking to Los Angeles, but I’m moving tomorrow, so it seems only fitting that we’re talking about a movie that takes us away to somewhere new. Tonight, we’re watching Woody Allen’s 2008 film Vicky Christina Barcelona and drinking the collaborative beer Ovila Abbey Saison. What’s the connection? Well, according to the bottle, the monks of New Clairaux and the brewers at Sierra Nevada created this beer to help support the restoration of a Spanish monastery. And the confluence of Spain and the U.S. is subject of our discussion for tonight. That and Woody Allen. We’ll probably talk about him as well…

For those unfamiliar with this film, here’s a quick overview. Vicky Christina Barcelona is a film about beautiful people (Scarlett Johansson, Rebecca Hall, Javier Bardem, Penelope Cruz) in a beautiful place (Barcelona) doing beautiful things (each other). What’s not to like? Actually, in general, there isn’t much not to like. The acting is good, the writing is sharp and poignant (if a bit heady) and the scenery is beautiful (Javier Bardem, anyone?). Though the subject matter is a bit familiar, as our cast of characters finds themselves impossibly in love with the wrong people, the story still feels fresh with Woody Allen’s unique sense of style. That being said, there are certain aspects of his style that I found distracting and a bit irritating. Most egregious is the voice over. I am both a fan and a hater of voice-over, so my own feelings on this subject are quite complicated. However, for this film, the voice over seems redundant to the actual narrative and really only serves to a fill spaces between scenes and inform otherwise lovely photography. Rather than let the audience enjoy watching the characters of the film explore Barcelona and, in turn, explore their own feelings, Woody Allen tells the audience exactly what is going on in his characters’ heads and why. And though, at times, it gives us a good laugh, it mostly just makes us feel like we’re too stupid to understand the intricate workings of Woody Allen’s brain. Other than that, the film is quite fantastic. The acting is stellar. Penelope Cruz steps up to play the crazy Spanish lady, as always, and Javier Bardem successfully seduces everyone in the audience. To be honest, I kind of want to go to Barcelona now, as the city itself becomes a character (hence its name in the title).  Vicky Christina Barcelona is definitely worth a viewing, even if you have a complicated relationship with voice over. A few other quick points that I have to point out. The soundtrack for this film is perfect. It’s really quite lovely and seems to capture all of the topsy-turvy emotions of the film. Also, the editor needs to make up her mind. Stylistically, this film is all over the place to the point where it stands out (and not in the good way). We have split screens, crossfades, wipes and long takes. It’s very inconsistent and it bothers me. Those who have taken film classes will know what I’m talking about. Those who haven’t taken film classes, I’m sorry but you’ll just have to trust me. 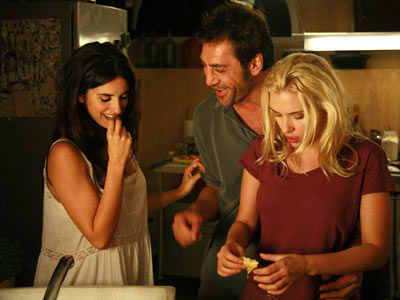 Love triangle? Screw that. We're going for a love pentagon.

Anyway, let’s talk about beer. I’ll say this straight off just to clear the air: I really enjoy saisons (farmhouse ales) but this one disappointed me. This 1 pt 9.4 oz. bottle of 7% ABV beer was one of the more uninspired and uninteresting saisons I’ve had. Generally speaking, in my opinion, a saison is a very flavorful and exciting beer. While typically quite drinkable, saisons I’ve had run in the 7-8% range. I like saisons because they offer a great alternative to “typical” beers as they can be quite floral and full in their flavor. However, Sierra Nevada’s Ovila Abbey Ale falls short of that benchmark. While I definitely get the Belgian yeast, there really isn’t much else going on in this beer. The flavors were muted and uninspiring. Though easy to drink, I found myself drinking quite slowly as the beer rarely drew me back for more sips. I mean, I did finish the beer, but it took me longer than expected and I wasn’t left wanting more. The beer wasn’t bad, it just wasn’t that great. As a beer that advertises itself as a saison, I have to say I was let down. I found this beer more to be in the vein of a Belgian-style ale but it still was a bit lackluster. Sorry kids, I don’t mean to be a downer, but I don’t think I’ll be buying this one again.

So there we have it. BAAM’s final Hollywood entry. Future BAAM combos will be coming from the hills of Glendale/La Canada, which really won’t change anything at all about this blog. However, I will be closer to my favorite beer purveyor, Galco’s, so that’s good news for me. I once had a film professor tell me that if Woody Allen ever stopped making movies (he averages about one a year, an unheard of turnaround rate),  Woody would probably die. And I think I agree. Woody Allen knows how to do nothing else except make movies. But unlike Woody Allen, I think I’ll live without buying this beer again. 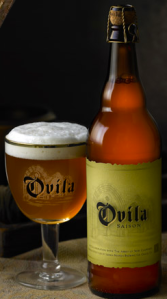 Distinctive Belgian yeast flavor
Easy to drink, but not much else