In the international spirit of the Olympics, tonight’s combo is imported from Japan. While there are plenty of American films & beers to discuss, it’s nice to step outside of the U.S. from time to time. And with that in mind, let’s dive right into tonight’s pairing of the fantastic animated film Spirited Away and Hitachino Nest’s unique Red Rice Ale.

For those of you who haven’t seen the 2001 Academy-award winning animated film Spirited Away, directed by the unparalleled Hayao Miyazaki, stop reading this review and go watch the movie. Without exaggeration, this film is truly beautiful and offers something to every audience member. Ostensibly about a young girl who becomes trapped in a magic bathhouse, the film’s themes are broadly human and deeply touching. Buried in this astounding and unfamiliar magical world, our protagonist, Chihiro/Sen undergoes an immediately familiar coming-of-age tale.

Note: I know I can’t really do the plot justice, so I’m going to avoid exposition and just tell you what I think about this film. 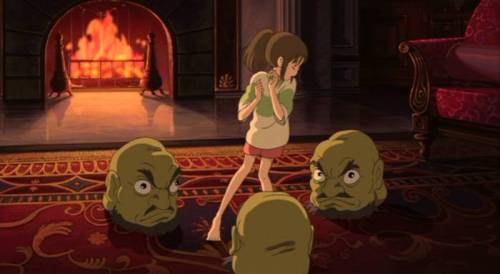 Just another day at the magic office.

Though every frame is filled with monsters and creatures, our attention is always focused on our hero’s journey. And that kind of focus is difficult to achieve. Every detail of Miyazaki’s film is accounted for and presented as if it’s part of our everyday experience. Lanterns hop around on feet, trains float over water and dragons streak across the sky. The close-minded will only see an animated film as a “kids movie” and will fail to see the onscreen ingenuity of the fully-realized universe that is Spirited Away. And this film is not for kids. It’s for everyone. Yes it’s a bit childish at times, but it’s also a bit bloody and intense. The film’s two bad-guys, Yubaba and No-Face are some of the scariest, and most well-rounded, “villains” you’ll find on screen. Moreover, despite the film’s 2001 release date and Japanese subtitles (I chose to watch it with subtitles but an American dubbed version is readily available), the film is utterly timeless. A girl’s search for her parents and a quest to save the boy? It never gets old. And so what if I come off as hypoerbolic? If a Miyazaki film doesn’t leave you with a little child-like euphoria and sense of wonder, then you’re not a person. Fact. 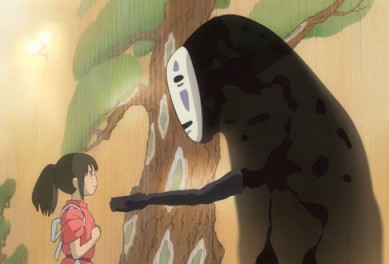 No Face is definitely not a creeper…

And to wash down this profoundly unique cinematic experience? How about a beer brewed with…rice?! That’s right folks. Hitachino Nest’s Red Rice Ale is probably the only rice beer I’ve ever seen. For those of you who regularly frequent craft beer stores, you’ve probably seen Hitachino Nest’s adorable labels. To be honest, that’s what caught my eye about this beer first. Proof that good packaging works! But did the beer hold up to the labeling? In fact, it did. This tasty beer poured a light gold color with a pinkish hue that others have described as “grapefruit.” Despite having been brewed with rice, the nose is distinctively beer-y. When you get a taste, you’ll get some nice, fruity sweetness balanced appropriately with malt. As that fades, you’ll get hit with some unexpected smoothness. The fact that it’s so smooth is almost a bad thing, since it made the beer so easy to drink! I finished my $6 bottle faster than I expected and I wished I had another to hold me over. So yes, the beer is a little pricey but I’d say it’s worth it. Not that I can afford to drink one every night, but on a special occasion (or if you really want to impress your friends), grab one of these and enjoy your evening.

So there you have it, folks. One of the better matched combos we’ve done here recently at beer and a movie. Both Spirited Away and the Red Rice Ale served as beautiful ambassadors from across the Pacific. A uniquely sweet and smooth beer with an unmatched animated tale of love and magic. Separate or together, these two bits of entertainment are sure to make you smile and leave you thinking.

And as always, keep drinking my friends! 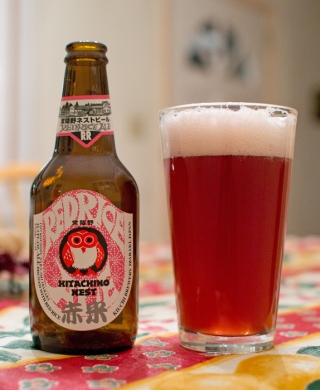