Let’s get STRANGE! Today we’re drinking Missouri’s Boulevard Brewing’s Long Strange Tripel and watching Stanley Kubrick’s Cold War satire Dr. Strangelove. It’s been a little while since I’ve seen this movie and I’ve never even heard of this brewery before, so I was ready for a bit of a weird night (get it?). But fortunately I was pleasantly surprised. So let’s get started, shall we?

Kubrick’s Dr. Strangelove or: How I Learned to Stop Worrying and Love the Bomb is one of those classics that everyone is supposed to see at least once in their in life. A bizarro satire of the Cold War arms race infused with real worry concerning the possibility of nuclear war, the film sits in the unique position of being both perfectly attuned to its time while also remaining a timeless lesson in the risks of war. For those who are unfamiliar with the film, it loosely tracks the aftermath of an Air Force commander’s decision to nuke Soviet Russia in effort to “preserve our precious bodily fluids.” I say loosely because the film is actually less about the actual events and more about the myriad of wild characters that occupy the film. In a strange, twisted way, the film does a great job of simply extending real Cold War rhetoric to it’s next absurdly logical step. For example, the idea of nuclear deterrence is carried beyond that basic idea to completion: purposeful mutually-assured destruction in the form of a “Doomsday Device.” In a weird, scary way, it makes the argument if one person can’t win the war, then NO ONE gets to win.  I’m realizing that it’s hard to describe the satire (or any satire, for that matter) without you having seen it but ultimately, the film achieves that perfect balance of laugh-out-loud comedy and coming dangerously close to our own history. 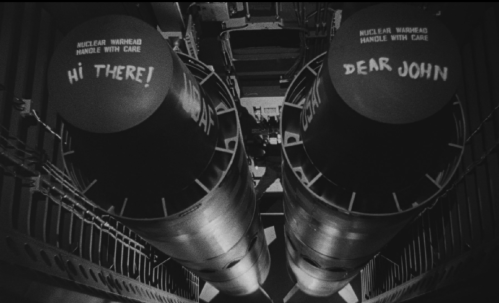 What dragged Dr. Strangelove down for me is its pacing. While the film is funny and poignant and well-acted, there are several long (LOOONNGG) stretches where we simply watch Airmen rattle through military jargon as they fly into Russia. Sure, it lends some realism to an otherwise absurd film, but it really can drag at times. In contrast, the film’s titular character Dr. Strangelove only appears in two scenes that are not exceptionally long even though we wish they were. He steals those scenes, but I wanted more of him and less of planes flying. But that’s mostly just personal taste. Overall, the film is a quick 90 minutes of historical fun that I’d suggest you enjoy sometime.

Come at me with your sharp political satire, bro!

And our Long Strange Tripel: was it as strange as our movie? It’s actually been awhile since I’ve had a tripel so it took me a few sips to remember what I should be expecting but I refreshed pretty quickly. Pouring a lovely hazy golden color, I was thoroughly impressed by the massive, three finger head. It was frothy, pure white and took its time to dissipate, leaving behind some lovely lacing. From the glass, you get a nice, grainy aroma with hints of Belgian yeast. With your first sip, you’ll get more of that wheaty graininess infused that banana-y Belgian yeast. I also found the beer is smoother than expected with sweet highlight notes of fruit and citrus. However, none of these flavors dominated the palette one way or the other, making the beer a good, middle-of-the-road easy drinking beer. So if you want something a bit yeasty and on the strong side (9% ABV), I’d say you could do a lot worse than Boulevard Brewing’s Long Strange Tripel.

So there you have it, Drinkers! A strange night! Actually it wasn’t all that weird, to be honest. It was nice. A classic satire and a surprisingly drinkable complex beer. A little mix of high and low brow, which is something that everyone needs from time to time.

Oh also, as a heads up, I’m about to start a brand new job on a TV show that’s moving into production shortly, so I’m not sure what my schedule will be like. I will try my best to keep getting BAAM’s up regularly but bear with me as I find my footing with the new schedule. 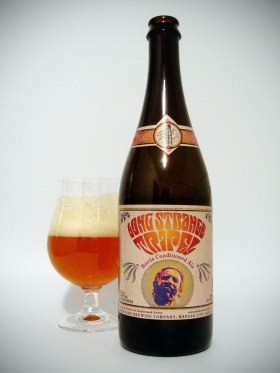