Today’s post celebrates BAAM’s second birthday! I can’t believe it’s been two years since I started this silly little drinking adventure but here we are: with developed palettes and terrible taste in cinema. In celebration, I invited a few friends over to share some beers and introduce them to the horrendous 1980 film The Apple. Since there were a few different beers on hand for the event, I’ll just give a brief overview of each one while also providing a more in-depth review of the film…if there’s any depth to be had. So, without further ado, let’s get started!

Now since most of you are normal, well-adjusted people I am going to assume that none of you have even heard of  The Apple so I’ll summarize. The Apple is a musical allegory for Adam and Eve set in a a futuristic dystopian 1994 in which a music mogul has taken control of the world due to the overwhelming popularity of his song “Bim.” The lyrics to said world-dominating song are as follows: “Hey hey hey, Bim’s on his way.”  Ostensibly the film follows the disparate lives, successes and failures of couple Bibi and Alphie who choose different paths after they are offered a major record deal with music mogul Mr. Boogalow but we all know that’s just a bunch of crap. This film is mostly just an excuse for expensive musical numbers. 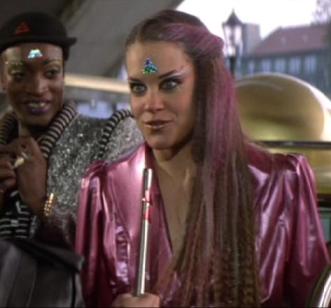 The price of success

If you watch this movie, which I recommend you do, you’ll realize that about 80% of the film is an incomprehensible, fever-dream of musical sequences that only loosely relate to the plot. The other 20% is filled with bad acting, shiny spandex and face paint. But this is not a movie you watch to understand. You watch The Apple to be confused and then to rip on it. In fact, heckling is encouraged in my book. If you watch this on your own, you won’t have any fun. So be sure to bring a friend when (not if) you watch this masterpiece of garbage. I guarantee you won’t regret it. GUARANTEE!

And the beers we sampled? It was a nice mix, representing my beer-drinking history and geography from Boston to Los Angeles. I even had a few more beers that we didn’t get to but that’s fine. Just more beer for me and more BAAMs for you! Here’s a quick breakdown of what was consumed.

Stone’s IPA
-A solid, San Diego IPA
-Hop-forward aroma and taste but not unforgiving
-A great entrance into the IPA world 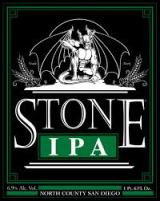 So again, I want to thank each and every one of you sticking with me these past two years. BAAM has always been a great excuse for me to try out great beer and watch random movies, but it’s your comments and support that make it thoroughly gratifying. So cheers to another successful year of BAAMing!