Since I’m sick of waiting on the library to send over my movie selection for my 4th of July special, I’m saying screw it and just doing another BAAM. Fortunately for you, this “screw it” attitude and tonight’s film are still in the spirit of America, even if our beer is from the UK. But we can just pretend I’m tying some history into tonight’s review. Yeah….totally planned that one.

Anyway, tonight’s combo is all about cars. I’m sipping on an Old Engine Oil and watching the cult classic Death Race 2000. There were tons of great car movies I wanted to watch tonight, but my secret love of Sylvester Stallone combined with a lack of accessibility to other movies meant that I watched Death Race 2000. And now you know how beer and a movie comes together. But that’s enough peeping behind the curtain. Let’s get tonight’s show on the road, shall we?

Unlike its crappy 2008 Jason Statham reboot, the original 1975 film Death Race 2000 is classic a Roger Corman dystopian blood n’ boobs fest. Taking place in the distant future-past of the year 2000, the United States is a totalitarian nation governed by guys in tacky brown suits and a man named Mr. President who lives in a crystal palace in Shanghai or wherever. Anyway, for some reason this reconstituted U.S. now loves the bloody Transcontinental Race in which drivers maneuver animal-themed cars cross-country and score points by running people over. At the heart of this amazing concept is the famed driver Mr. Frankenstein (because he’s been rebuilt a bunch of times…and wears a gimp suit) and his navigator, Annie. To make a short story shorter, Annie is really freedom fighter sent to kidnap Mr. Frankenstein but, surprise surprise, ends up falling in love with him. Somewhere between the film’s expository intro and the moment when Frankenstein reveals that he too wants to topple the government, Annie and Frankenstein square off against Sylvester Stallone, who pretty much plays himself: angry, slack-jawed and totally bitchin’. 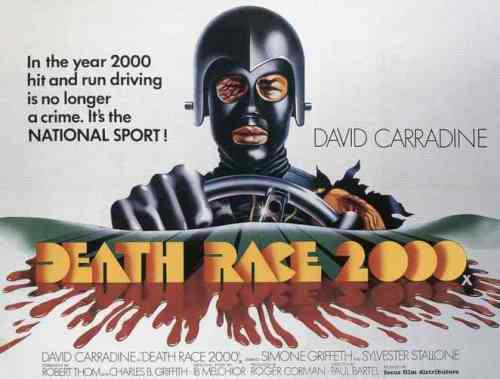 This is pretty much the entire film.

So now that you are up to speed on what the film is ostensibly about, let’s talk about it. Briefly. Death Race 2000 is one of those movies that make less sense the more you think about it. So setting aside the unexplained premise, the unexplained characters and the unexplained boobs, the film is actually pretty enjoyable. As long as you take this film for what it is (aka a crappy 70’s B horror/sci-fi flick), it’s not half bad. The film does do a good job of criticizing the news media and its proclivity for hyper-sensationalizing anything it can get its hands on. You’re constantly assaulted by obnoxious news casters who seem to care more about the blood than where the blood is coming from. And, on a more base level, the film doesn’t really pretend to  be anything more than what it is. It knows it’s cheap, cheesy and kind of hilarious, so plays that up. But it doesn’t really do anyone any good if I keep trying to analyze this movie. I’ll leave it at this: if you and your buddies are looking for a mindless but goofy evening, then check this movie out. But if you don’t think it’s really going to be your thing, odds are it isn’t.

They don’t make posters like they used to. Also that white outfit isn’t in the movie.

And did our Old Engine Oil keep pace with tonight’s film? In a word: yes. This tasty U.K. porter sports a modest 6% ABV and pours a deep, black color. Combined with a rich thickness, it’s not a stretch to guess how they came up with the name. Giving off a strong aroma of chocolate malt, this beer is startlingly smooth and balanced. Sure, it has that rich chocolate malt flavor like any self-respecting porter, but the maltiness never dominates. Rather, you are given arguably one of the smoothest dark beers around. For those looking for big, bold flavor, I suggest you look elsewhere. Old Engine Oil is much more about it’s smooth mouthfeel and ease of drinking than it is about loud flavors. And I appreciate that. This beer offers the odd prospect of a heavy beer without the weight. If that makes sense. Feel free to call me out on that one.

So there it is, folks. Our non-4th of July special turned out pretty good. Though we’ll have to post-pone the actual 4th of July combo a few more days, I think tonight’s BAAM still captured what we Americans love most: movies, beer, boobs and blood. Oh and hand grenades.

But seriously, tonight’s combo was a lot of fun. We had a great, easy-watching film with a great, easy-drinking beer. Both were fresh and invigorating without overpowering to the senses. While Death Race 2000 is a little (or a lot) crazy, it’s still good fun. And what better way to enjoy a mindless 70’s David Carradine cult classic than with a little beer your belly? 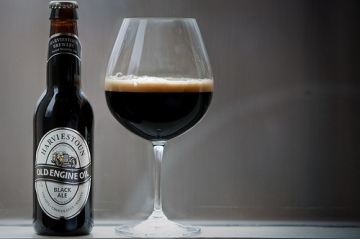