Tag Archives: the kid with a bike

Bacchus & The Kid With A Bike

Now that I finally have internet in my new apartment, I thought I’d celebrate in the only way I know how: with a brew in my hand and a movie on my screen. Tonight’s combo brings us across the pond to Beer Heaven: Belgium. The home of some of the best beers in the world, Belgium is also known for occasionally putting out some great films. Who knew? And since we’ve talked about Belgian or Belgian-style beers in the past, I thought it would be appropriate to pay tribute to their other cultural contributions. So let’s hop on that bike and go for a spin!

For starters, The Kid With A Bike is a 2011 Cannes Grand Jury Prize winning Belgian film directed by the prolific and talented Dardenne brothers. This French-language film follows the painful story of Cyril, a young boy who is abandoned by his father and taken in by a hairdresser. Cyril is an enigmatic mix of depression, denial, independence and longing. It’s mix of character traits that makes sense given his abandonment but is still impressive to see. The young actor, Thomas Doret, portrays all of these emotions so naturally and hauntingly. Cyril is desperate for attention and guidance while also constantly shutting out everyone who tries to help him. The only exception to this is a local thief who briefly acts as an older brother ends up just using him to help steal money. At every moment, you feel like Cyril is capable of so much growth but in the end, he always shuts himself down and hurts those around him. It’s frustrating, confusing and most importantly, real. 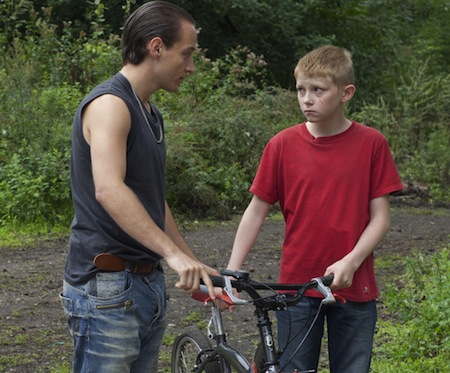 It doesn’t really do much good to go any further into the plot. First, I don’t want to spoil it for you. Second, there’s not much else to say. This is much less about the story and more about the characters. Yes, the events shape the characters and their relationships, but the moments are short. Catalytic. The majority of the film can be found in the quiet moments in between. At the dinner table with Cyril and Samantha, his guardian. In the long bike rides. In the silences where character’s faces seem to only say “I don’t know how to deal with this situation so I’m just not going to say anything.” Overall, it’s a brave bit of filmmaking. The Dardenne brothers trust in their actors and their visuals so completely that the film really has very little else to fall back on. If what I’m describing sounds like a boring film, that’s only because I’m not doing it justice. It truly is an engaging (and quiet) film that is both painful and rewarding to complete. 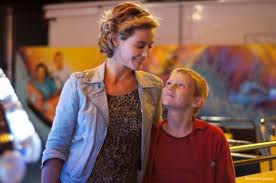 I promise it does have a happy ending…sorta

And our Bacchus Belgian beer? Quite tasty, actually! Bacchus however is not your typical “Belgian” beer. Most Belgians have a distinct banana-y yeast flavor that is immediately recognizable. Instead, this beer falls into the genre of Flanders Oud Bruin (Old Brown Flanders). I’ll admit that I’m not as familiar with Flanders-style beers (except that the three I’ve had in my lifestyle are awesome!) but if I’m not mistaken, the Bacchus is a fair representative of the style. It pours a nice ruby-brown color with a modest head and lots of tiny carbonation. The smell that hits you once you pour is the one you’ll be tasting, so hopefully you enjoy strong notes of cherry and citrus. The beer is a bit on the sweet side but has a hint of a sour bite mixed right in the middle. Yes, the profile is not exactly complex but it is quite tasty. The sweet, fruity flavor combined with a mild ABV of 4.5% makes this beer very easy to drink without becoming a guzzler. Or maybe I’m just a classy fellow.

So there you have it, drinkers! A quick trip to Belgium! We had a strong movie with a modest beer that I think worked out quite well. Where the beer was sweet but one-note, the film was tough but deeply complex. I’d definitely recommend checking out both of these, if only to make yourself feel culturally superior to your friends.

Seriously, when’s the last time they watched a movie in French?

And as always my friends, keep drinking! 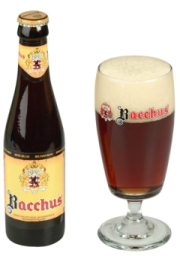 The Kid With A Bike:
-Quiet but powerful
-Fantastic performances without much dialogue
-Apparently Belgium makes good movies. The more you know