In anticipation of the upcoming U.S. release of The World’s End, and everyone’s love of zombies, today we’re celebrating Shaun of the Dead. And fitting with the British theme of beer consumption in this film, and all the other films in the “Cornetto Trilogy,” I’ll be sipping on Dogfish Head’s Noble Rot (got it yet?). So let’s get started, shall we?

Released in the U.S. in 2004, Shaun of the Dead is one of those rare movies that jumps from cult favorite to modern ubiquity. Starring a then largely unknown Simon Pegg and Nick Frost, Shaun of the Dead follows our unlikely heroes as they navigate a  sudden zombie outbreak. To call the movie a zombie-genre spoof though both denigrates this film and unreasonably elevates the genre. While Shaun of the Dead is ostensibly a satire, it is also a loving (and highly intelligent) homage to everything we know and love about the zombie genre. Romero and 28 Days Later  references aside, the movie takes pure joy in flexing the genre’s familiar muscles while also playing them for laughs. Even the visual style, which is remarkably distinct, has fun with the intensity and hyper-realism found in other zombie flicks.

Who knew the undead were so funny?

There’s a actually a lot I’d like to say about this film but the sake of time and cohesion, I’ll try to remain brief. I do want to point out that there are few films that make you as keenly aware of the film’s planning than Shaun of the Dead. The film so expertly folds back in on itself, both in its writing and its visuals, that the viewer gets the sense that as silly as the film is, its creators took their jobs very seriously in the film’s making. From the mirrored, long single-takes to the secret foreshadowing drinking schedule of Ed, even down to the repeated little argument about whether dogs can or can not look up, Shaun of the Dead is a film that was clearly well-planned and expertly executed.

Do Cornetto’s even exist in the U.S.?

Finally, I’d like to just make the point that this film is unabashedly British, which I love. Maybe this is because I’m an American and this film wasn’t made with the intention of being an international success, but Shaun of the Dead makes no attempts to Americanize itself in its language or humor. An obvious result of this is the ease with which the actors occupy their characters (also, they’re just good actors) and moreover, the comedy feels cleaner and truer to the tone the for which the film strives. Overall, Shaun of the Dead undoubtably ranks not only among my favorite comedies, but also among my favorite films. 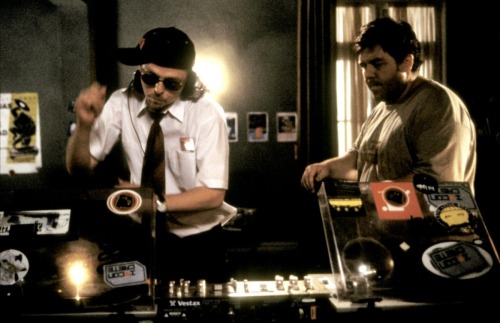 It’s not a spoof, it’s Electro

And while our zombies were rotting away on screen, how about Dogfish Head’s Noble Rot? To be honest, I didn’t really know what to expect from this beer. I think I bought it because of the label was cool and it seemed like a good fit for the movie. Also, I figured that a $20 bomber from the “off-centered” brewers of Dogfish Head would be a pretty good. And I guess my intuition was correct because this beer was CRAZY GOOD! Ostensibly a saison, this beer is brewed with grape must (unfermented wine grape juice) which makes it a magical beer/wine hybrid. Pouring a beautiful clear, light gold color with tons of tiny bubbles, you’ll instantly start making comparisons to champagne. With a powerful white wine nose, backed up with a little bit of wheat, yeast and fruit, the beer has a distinct and delicious aroma. With your first sip, you’ll get all of those flavors in a lovely, subtle mix. It has the body of a lighter saison, and that grainy flavor you’d expect, but the grape must adds this fantastically smooth and sweet white wine aspect that you rarely find in a beer. And even with a hefty 9% ABV, the beer never weighs you down or feels too boozy. Rather, you get that relaxing sensation that comes from sipping a cool glass of white wine on a warm summer evening. So overall, I consider this beer a real winner.

So there you have it, folks. A simply rotten evening. A truly unique and delicious brew with a fresh and engaging zombie comedy. I think it’s about as good as BAAM gets in my book. And while the beer was a bit pricey, having a friend to share the experience (and tab) would only make the evening a little sweeter.

Thanks for reading and as always keep drinking, my friends. 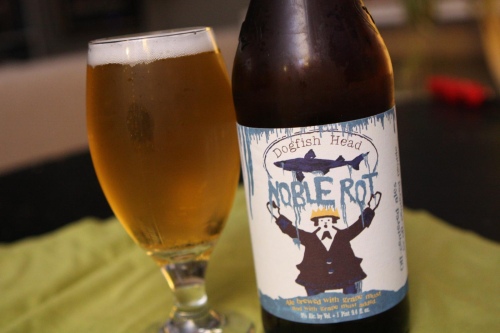 Shaun of the Dead:
–Everything you love about zombie movies, but smarter
-Expertly written, shot & acted
-Both a spoofy & loving homage to the genre

Today we’re running RAMPANT with New Belgium’s Rampant Imperial IPA and the 1997 creature-feature Mimic. Bugs n’ beer! Because if it rhymes then you know its gotta be good. Right? How about we dive into the nasty subway tunnels of late 90’s New York and find out?

Mimic is one of those odd movies that apparently everyone has seen and yet it is never classified as “great” or “terrible” or a “classic.” For such a seemingly ubiquitous film, the general consensus surrounding the film is a resounding “oh yeah, that movie with the bugs.” And that’s actually a pretty accurate assessment. It’s memorable enough but doesn’t seem to stand on its own as a classic creature horror movie. In fact, that seems like the official position of the film. Director Guillermo del Toro (who most recently directed Pacific Rim) apparently disavowed the film after it was released, citing difficulties with the infamous Weinstein brothers. But setting all that gloom aside, let’s just take a look at the film as it is.

For the most part, Mimic is a fun and generally unsettling monster movie in which bioengineered termites/mantises grow into human sized and human shaped bugs that kill people. For those of you who are familiar with del Toro’s work, this sounds an awful lot like Hellboy. And Blade II for that matter. Both silly. Both great. But back to the movie at hand. What makes this movie different from other monster movies is the amount of time spent not combatting the insectoid-enemy. In fact, most of the movie is spent just creeping us out while our hapless CDC heroes find little clues along the way. There are few flashy deaths, no great public panic, no grand plan and no great final assault. Instead, our heroes accidentally find this infestation and through sheer luck (and little bit of balls), manage to destroy the infestation. So, in that regard, the movie is fairly fresh and engaging because it allows our protagonists to feel more human and not superhuman.

Hasn’t seen this bug in three years yet totally unconcerned

But in other regards…not so much. For one, like all “science” based horror movies, it makes no sense. Somehow faster metabolism made these all female, sterile bugs reproduce really fast? And these termite/mantis bugs, which look like cockroaches, evolved to camouflage themselves from their human predators? The humans that didn’t know they existed and weren’t hunting them at all? Sure, aptly named “Judas hybrid” look real creepy but it doesn’t really make sense. Also, our heroes assertion that these bugs would have no problem infiltrating our communities is a bit of a stretch. I feel like we might start to notice the freakishly tall dudes in trench coats after awhile but hey, I’m not a scientist so I can’t say for sure. Aside from that, the acting is not stellar. For the most part, the characters are basic archetypes without much complexity but again this is a creature movie. So no one cares. Overall it was a fun movie that is spooky, not scary. Though at times a bit bloodier than you’d expect. Also Josh Brolin is in it, so that’s cool. Oh also Norman Reemus (from The Walking Dead) has a few lines too. 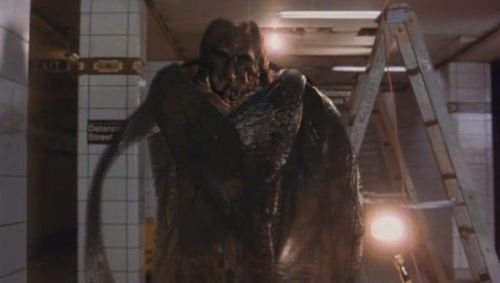 And while our on-screen friends were running rampant, was our beer doing the same? While I’m not sure “rampant” is the word I’d use to describe New Belgium’s Rampant Imperial IPA, I’d say it’s a pretty damn good beer. Pouring a nice clear, coppery color with a modest but lovely head, this beer is just a beauty to behold. Off the nose, you’ll get hints of hops with a surprising amount of malt in there too. With your first sip, you’ll definitely get that classic hoppy flavor you’d expect but it won’t overwhelm you. The bitterness of the hops is incredibly well-balanced against the bready, maltiness of the beer. Some sweet, fruity notes also come into play that help keep the beer feeling light and fairly refreshing. And despite the 8.5% ABV, the beer never felt boozy or heavy. Rather, Rampant is remarkably smooth and easy to drink. A definite must buy for those trying to experiment with some hoppier beers. And it’s a good beer for us seasoned hop-heads as well. A real crowd pleaser.

So there you have it, drinkers. A night of beer n’ bugs! So yes, rhyming does make it a good thing. A fun, creepifying movie that is easy to watch paired with an interesting yet easy to drink IIPA. Definitely a successful evening.

Thanks again for reading folks!