Welcome to the Jungle, Drinkers!

Do you ever really need an excuse to watch Jumanji? I doubt it. But in case you felt the need to justify watching a 1995 Robin Williams and Kirsten Dunst avoid gunfire and wrestle alligators (no, I’m sorry, crocodiles), then grab yourself a Tusker Lager and prepare yourself for a confusing evening. That’s what I did! I haven’t enjoyed either of these in years, which made the evening even more surprising, exciting and altogether bizarre. Let’s get hunting, shall we?

For those who need a refresher, Jumanji is the terrifying tale of the world’s more sadistic children’s game. This magical board game lures in unsuspecting children with drums and then, upon the roll of the dice, unleashes unholy jungle-themed horrors into this mortal world. Essentially, Jumanji is a portal to hell in a completely accidental and allegorical way. The film begins with the younger version of Robin Williams being sucked into the board game, not to return for another 26 years when Kirsten Dunst and her baby bro unwittingly continue the game. With an uncanny ability to convince others, (and an ability to avoid all symptoms of PTSD) the two children get Robin Williams and his old flame to continue the game in order to dispel the jungely evils that the game has released. I’d like to point out that at this moment, the only things the game had let out were about 10 monkeys (that seem to multiply and learn to drive by the end of the film), a few giangantor mosquitos and a lone, male lion. I’m not animal control expert, but that doesn’t seem that hard to manage, does it? Regardless, shit continues to get real as the film progresses until Robin Williams’s character learns to be a man, face his fears and a roll a three. Jumanji! 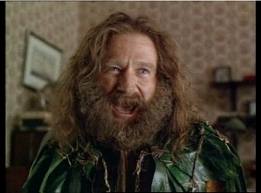 I'd trust this man with my life. Wouldn't you?

Okay, enough exposition. How was the movie? It was fine. But for a movie that I assume that was geared towards kids, it’s wholly terrifying. The CGI in this film is actually quite good, so seeing a young boy get sucked into a board game is not something you shake off easily. Yes, the fantasy and the unnerving comedy of Robin Williams in the face of almost certain death does seem apt for a kids movie, but at other times it seems too dark or too twisted. Maybe that’s just my “adult” eyes judging this film, but it’s a film that does not inspire much confidence in adults. Our two “adult” heros are repeatedly described as being trapped in their childhoods while all the “real” adults bumble about helplessly.  I mean, I guess that’s no different than most kids movies… except that a crazy man in a hunting outfit can drop a bunch of coins on a counter and illegally purchase a silenced automatic sniper rifle. Other than that it’s a fairly standard kids movie that is both exciting and scary at the same time. 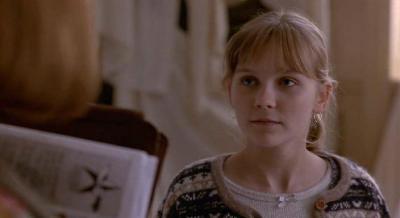 Remember when Kirsten Dunst looked the same as she always has?

So what was our Jumanji beer? It was East African Breweries’ Tusker Lager which all the way from Nairobi, Kenya. I actually first saw this back in high school when I spent a month in Tanzania (Kenya’s neighbor to the south). And no, I didn’t have one back then! Come on, guys! What do you take me for? Anyway, this lager is perfect for beating that Kenyan heat and is one of better light beers I’ve had. Though, to be fair, I haven’t had many light beers at all. Tusker pours a clean, straw color with minimal head. The beer smells a bit sweet and grainy, which is a good way of describing the beer. Though it is light and crisp, you get hit with strong notes of honey-like sweetness, fruit and grain. It’s incredibly easy to drink and very refreshing, making it the perfect beer for the summer which is only…4 months away…

And I’m actually kind of glad that this beer was so light when you think about it in terms of the film. Had I been a drinking something heavier, I think the darkness of the film would have gotten to me. I mean, a small New Hampshire town, that is inexplicably filled with vandals and the homeless, is easily overrun by a bunch of monkeys. Oh and the local police does nothing to stop the man with a gun walking through a store with what is a clearly a military-grade firearm. It’s scary stuff! Fortunately, the lightness of the beer helped remind me that this movie was supposed to be fun. And so fun was had in a bizarre, 1995 Kirsten Dunst kind of way.

Jumanji:
-A bit dark & creepy for a “kids” movie
-New Hampshire law enforcement is a bit lacking
-I want to watch Hook now.

One response to “Tusker Lager & Jumanji”